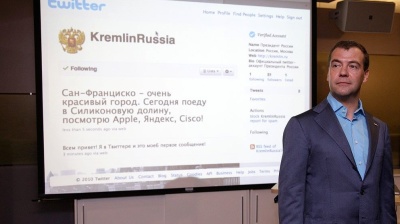 Dmitry Medvedev opening an official Kremlin account on Twitter in 2010 at which point he was serving as Russian president.
By bne IntelliNews August 2, 2019

The US-based company was fined by the court for a failure to furnish information about localization of databases of Russian users, press secretary of the Russian telecom and mass media watchdog Roskomnadzor Vadim Ampelonsky told TASS.

The judicial district of the Justice of the Peace in Moscow’s Tagansky District imposed a RUB3,000 fine on Twitter on April 5 under Article 19.7 of the Russian Code of Administrative Offenses (Failure to furnish data or information).

Twitter filed an appeal against the decision to fine the social network. The Tagansky District Court left the ruling unchanged and the Twitter defense counsel’s complaint without satisfaction by its decision of May 8.

Under the Russian law on personal data, which took effect on September 1, 2015, national and foreign companies are obliged to keep and process personal data of Russian users in the territory of Russia.

The law has caused wide spread comment and has seen as an effort by the Kremlin to gain greater control over the internet.