Turning to IMF now “easiest option” for Turkey “and the sooner the better”: analyst 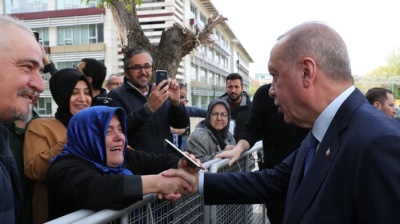 Erdogan, pictured on April 13, suffered embarrassing reverses in the end of March local elections after voters responded to the economic misery engulfing them. / Turkish Presidency.
By bne IntelliNews April 14, 2019

“The easiest option at this stage” of Turkey’s economic turmoil is for Ankara “to go to the IMF for support, and the sooner the better”, analyst Timothy Ash advised in an April 12 note to investors.

Ash, senior emerging markets sovereign strategist at BlueBay Asset Management, added: “I don’t want to be overly alarmist herein but in my twenty years covering Turkey, I have not felt this concerned—aside from perhaps back in the 2000/01 crisis. And not even during the 2016 coup [attempt] as any experienced Turkey watcher knew back then it was always going to fail.”

A difficulty for the Erdogan administration in contemplating going to the IMF is that President Recep Tayyip Erdogan has always prided himself on doing away with Turkey’s need for help from the institution after he came to power 17 years ago.

Policy makers like Turkish Finance Minister Berat Albayrak “need to accept the reality and act fast”, Ash said, adding: “Delaying now will just increase the price of adjustment further down the line. Indeed that should have been the lesson from the policy mistakes made in 2018 and which drove and accentuated the crisis last year.”

“Huge macro challenges”
Ash concluded that currency crisis and recession-hit Turkey “…faces huge macro challenges, they could muddle thru with perfect policy execution but experience so far suggests this is unlikely. And even assuming perfect economic policy execution the risks from repeat Istanbul elections [after complaints of irregularities from the ruling AKP party after the opposition’s March 31 narrow win] and the threat of S400 sanctions [if Turkey refuses to accept Washington’s request that it cancels its order for a Russian missile defence system] makes such a successful outcome even harder to deliver on”.

An IMF programme would be the easiest way to quickly restore confidence and credibility around Ankara’s economic policy, the strategist said, noting: “Given the problems thus far are not really in public finance I imagine such a programme would not be overly austere. Turkey needs BOP support to bolster reserves and help stabilise the lira. I would imagine the need for root and branch changes at the CBRT [central bank] and a total overhaul of monetary policy—with the likely key IMF [demand] being cast iron assurances from the presidency over the independence of the central bank.”

Looking at what economic action Turkey could embark on, Ash said: “For me the questions are how specifically the fiscal adjustment will be delivered—what specific spending cuts and tax hikes are going to be rolled out—how is the bad bank going to function and I have major concerns over monetary policy still. On this latter note the CBRT [central bank] talks about normalisation of policy at the 24% o/n [overnight] rate but in reality pressure has been put on banks to cut both deposit and lending rates.

State banks “lending at a loss”
“State owned banks seem to be lending at rates of 15-16%, well below the o/n rate and inflation. They are lending at a loss, partially covered now with this latest capital injection by the state. But how is this consistent with the CBRT’s normalisation mantra and its talk of tight monetary policy—it is not. And worrying here it is again eroding confidence and credibility in policy which I think continues to drive dollarisation and selling pressure on the lira.

“Now I have long argued that Turkey can negotiate through its current difficulties without recourse to borrowing from the IMF—other things being equal. But it needs almost perfect policy formulation and delivery. And it needs to be pitch perfect. Investors need to be reassured—transparency needs to be at the forefront. And it’s the same for locals—who are currently driving dollarisation. Herein the room for error is limited as FX reserves are dangerously low—less than 50% of gross external financing needs.

“Turkey could still do it but it also needs luck and a favourable external backdrop. In terms of global liquidity conditions these do look favourable. But two issues [the potential election rerun and the S400 situation] now really worry me.”