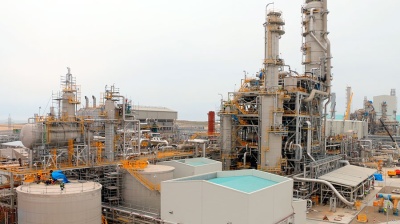 The urea and ammonia factory in Garabogaz, built with a Japanese loan, belongs to state concern Turkmenhimiya.
By bne IntelIiNews October 15, 2021

The media outlet’s investigation—conducted jointly with Turkmen.News and Gundogar.org—showed that an obscure Scottish company, Caran Holdings, is at the centre of mineral fertiliser sales produced at a large state-owned urea (carbamide) and ammonia plant in Garabogaz, Turkmenistan, operated since its launch three years ago by state chemical concern Turkmenhimiya and built with the help of a $1.16bn loan from the Japanese Bank for International Cooperation.

A key role in the Scottish firm has been played by one of the autocratic president’s nephews, Hajymyrat Rejepov. People declared as the beneficial owners of the company appear to be Rejepov’s employees.

Another UK company, Delanore, features in agreements to sell petroleum and chemical products from major state oil and gas facilities in Turkmenistan, with a secret role played by Hajymyrat’s brother Shamyrat Rejepov.

The two brothers have, meanwhile, acquired 16 apartments in Dubai, a playground for the rich and powerful.

Looking further at Caran Holdings, the media investigation determined that “though the company’s shareholders and ultimate beneficiaries have changed on multiple occasions, a key figure who played a secretive, controlling role was Hajymyrat Rejepov, the nephew of President Gurbanguly Berdimuhamedov”.

“This information is based on the Pandora Papers, a leak of millions of documents from providers of offshore corporate services that was obtained by the International Consortium of Investigative Journalists and shared with OCCRP and other media outlets around the world.”

The leaked records paint an ambiguous picture of the fertiliser and petroleum companies’ ultimate beneficiaries, according to OCCRP, which added: “Their shareholders were offshore ‘nominees’ whose function is to obscure the identity of the real owners. When U.K. law changed to require the disclosure of a company’s ‘persons of significant control,’ several little-known Turkmens were declared at various points. When OCCRP reached out to them, they were either unreachable or declined to comment.”

OCCRP concluded that it was unclear how much money Hajymyrat and Shamyrat Rejepov have made in commodities trading, but said that there were clear signs of their wealth in the United Arab Emirates.

“According to leaked real estate ownership data from Dubai provided to OCCRP by the research organization C4ADS, Hajymyrat Rejepov owns nine apartments in five buildings in the city: Sparkle Tower 2, Damac Heights, Sadaf 4, TFG Marina, which hosts a Wyndham Hotel, and the Matrix Tower. Shamyrat owns seven apartments in Sparkle Tower 2, Damac Heights, and TFG Marina. Except for the Matrix Tower, all the buildings are located in the Dubai Marina, an upscale neighborhood close to the emirate’s iconic man-made archipelago, Palm Jumeirah,” OCCRP stated.

The data, reportedly, does not include the dates of purchase, but based on when the apartments appeared in the database, and the dates the towers were built, they were likely purchased some time after 2018, the rough period when Caran and Delanore appear to have become most active, it added, saying: “By comparing the Rejepovs’ apartments to similar ones currently for sale in the same buildings, OCCRP and partners estimated that the brothers’ 16 properties are worth approximately $5.5 million.”