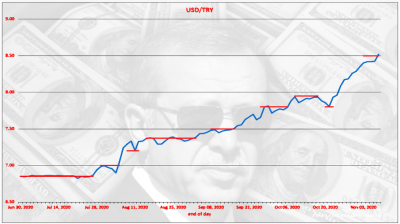 Goldman Sachs will await any possible policy decision that may follow the weekend replacement of Turkey’s central bank governor to gauge the extent of how thinking among the country’s policy makers may have changed, Bloomberg on November 8 quoted Murat Unur and Clemens Grafe of the US investment bank as writing in a note. Its report was published hours before the shock resignation of Berat Albayrak, the Turkish finance minister and son-in-law of President Recep Tayyip Erdogan.

The USD/Turkish lira (TRY) market opened with positive moves on Sunday midnight but the focus is now on the local market opening on Monday morning (November 9).

Under normal conditions, a change in the central bank governor should be a sign of a radical shift in monetary policy, which would mean a sharp hike in the main policy rate and a simplification of the current knotty funding mix used by the Turkish monetary authority.

However, the entirely unexpected exit of Albayrak may be a sign that developments are entirely unravelling beyond Erdogan’s control; as things stand, it is unknown whether he has a plan as to how to keep a grip on things.

The timing of any rate tightening is also important as, if Turkey’s central bank holds on until its November 19 monetary policy meeting (MPC) to bring in a cut, it would mean that Erdogan is buying in a deeper currency devaluation before going for sharper relief. The relief period for the Turkish lira (TRY) will be short-lived in any case.

Ahead of speculation surrounding the Turkish markets over the weekend, Goldman analysts stuck to a wait-and-see mood.

“Only future monetary policy actions will show if the new appointment once again implies a change in policy and, if so, in which direction,” Unur and Grafe also wrote.

Goldman did not rule out the possibility that the leadership change at the central bank could bring “material changes” in policy making.

“Monetary policy will need to prioritize external imbalances and financial stability going forward, as well as providing depositors with sufficiently high rates to compensate for the risk related to holding lira,” the analysts also noted.

Goldman maintained its forecast that the policy rate would rise from the present 10.25% to 17% by year-end “with risks to the upside”.

“There is also a risk that the upper bound of the interest rate corridor will be used,” Unur and Grafe said.

“We don’t know what is expected from the new governor Naci Agbal. Is it to keep the policy rate low, or to stop lira depreciation, or to provide funds to the Treasury from the central bank sources?” Ugur Gurses, a former Turkish central banker, wrote on November 7 in a blog post.