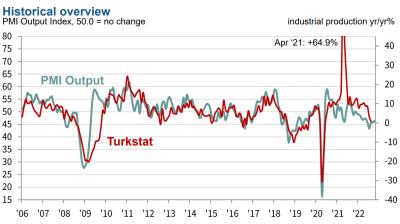 Turkish manufacturing in October suffered its most pronounced slowdown since May 2020, according to the headline Istanbul Chamber of Industry Turkiye Manufacturing Purchasing Managers’ Index (PMI) released on November 1.

The PMI dipped to 46.4 in October from 46.9 in September, thereby posting below the 50.0 no-change mark for the eighth consecutive month and signalling a solid moderation in the health of Turkey’s manufacturing sector, said survey compiler S&P Global.

Andrew Harker, economics director at S&P Global Market Intelligence, said: "Subdued demand conditions kept the Turkish manufacturing sector on the back foot in October, with weakness in international demand increasingly to the fore.

"With requirements to satisfy new work easing, firms looked to scale back both employment and purchasing activity, the latter providing some respite for suppliers and enabling them to speed up their deliveries to the greatest extent in just over eight years, thus lessening one of the obstacles to growth in the sector."

The PMI data showed new orders easing for the 13th month running amid a lack of demand. A similarly sharp slowdown in new export orders was recorded. The reduction of staffing levels accelerated to the fastest in nearly two and a half years.

Input costs and output prices continued to increase sharply in October, although in both cases rates of inflation softened from the previous survey period, S&P also noted.

“Higher input costs mainly reflected currency weakness, although there were also reports of rises in prices for energy and raw materials. In turn, charges increased as firms passed on higher input costs to customers,” it added.