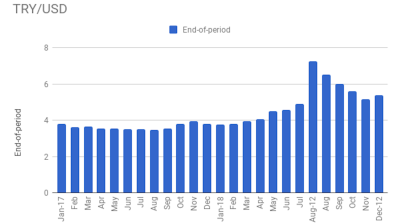 The Turkish lira (TRY) fell sharply on December 12 after President Recep Tayyip Erdogan said that Turkey is to launch an operation in the eastern Euphrates region of northern Syria within a few days.

The 5.40 threshold has been a sturdy point of resistance for the TRY against the USD since mid-November.

At the end of August, the central bank said that the sale of non-deliverable forward (NDF) contracts through the Istanbul stock exchange’s derivatives market was permitted.

The central bank does not announce any official target for the USD rate.

A stepping up of Turkish military operations and harsh rhetoric from Erdogan directed at his Western partners are traditional pre-election campaign moves in Turkey, tolerated by the president’s allies.

Turkey is to hold its local elections on March 31 next year. Erdogan’s need to count on drumming up some nationalist sentiment may be more pronounced than usual prior to these particular polls given that he looks likely to enter the big campaigning period at a time when the electorate is suffering a painful recession brought on in part by the currency crisis.

The markets, meanwhile, find it difficult to stomach Erdogan’s military actions and pre-election stimulus policies. The election build-up season is once again producing tensions between market imperatives and the Erdogan regime’s political needs, and it seems that the Turkish authorities have dug their trenches at the 5.40 lira-to-the-dollar level this time around.

Underestimated markets’ power
Prior to the June 24 presidential and parliamentary snap polls, Erdogan underestimated the markets’ power and the central bank was pushed to employ significant rate hikes to stop the lira from weakening ever further to consecutive record lows.

“We will start the operation to clear the east of the Euphrates from separatist terrorists in a few days. Our target is never US soldiers. This step will allow for the path to a political solution to be opened and for healthier cooperation [with the US],” Erdogan said in a speech televised live, Reuters reported.

Deep differences with the US over policy in Syria should not hinder Turkey’s wider cooperation with Washington, Erdogan also said.

The eastern Euphrates region in Syria is under the control of the Syrian Democratic Forces (SDF), which includes the Syrian Kurdish YPG militia, backed by the US army.

The YPG and PKK, which has fought a decades-long insurgency in Turkey and which is also recognised as a terrorist organisation by the US and the EU, are openly joint members of the umbrella group KCK under jailed Kurdish leader Abdullah Ocalan’s ideological leadership. However, the US and the EU do not see the YPG as a terrorist organisation, and the US insists in its official line that it can distinguish between the YPG from the PKK. The US has relied on the YPG as a dependable fighting force in its efforts to crush Islamic State in Syria. However, some of those efforts have been hindered by Turkish attacks on the YPG.

The US has been setting up observation posts in the region along parts of its border with Turkey since last month to foil Turkey’s military interventions. Ankara has advised Washington it should desist from this.

Turkey-US relations have shifted back to a friendlier footing since the release of US Pastor Andrew Brunson by a Turkish court in the autumn, although conflicts over Syria and Nato member Turkey’s planned S-400 advanced missile defence system purchase from Russia remain unsolved.

Earlier this year, the US allowed Turkey to invade the YPG-held Afrin town, on the western part of the Euphrates river, before the snap June polls.

Russia opened up northern Syrian airspace for Turkish jets during the Afrin operation.

Russia is a close ally of the Damascus regime, but Erdogan has rejected reinstating official diplomatic relations with Damascus.

“We talked about possible joint efforts to remove the YPG from Manbij,” Erdogan said on December 1 after holding a meeting with Donald Trump on the sidelines of the G20 summit in Buenos Aires.

He, however, did not say whether Trump agreed to make the Kurdish militia remove themselves from Manbij.

Also on December 1, Erdogan said that he told his Russian counterpart Vladimir Putin in a meeting in Buenos Aires that he wanted another summit to discuss the situation in Syria’s Idlib, where Turkey and Russia are attempting to create a demilitarised zone.