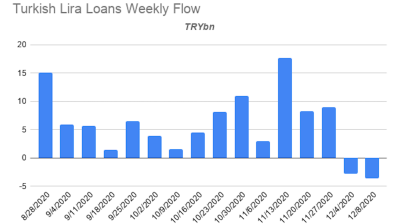 Fresh loan flow, or lira supply, is turning negative after ultra-strong growth. Millions in Turkey faced harsh poverty even during that growth, while loans were spent on buying gold, FX, real estate and so on by the more fortunate. With the loan flow cut, how long is the harder reality sustainable?
By Akin Nazli in Belgrade December 11, 2020

The Turkish authorities do not provide actual data sets on the problem loans in question, known as Stage 2 loans.

Data sets are also not available on the loans taken out under the state’s Credit Guarantee Fund (KGF) or on restructured loans.

The NPLs are grouped as Stage 3-4-5 under Turkish regulations, while performing loans are categorised as Stage 1.

On December 8, banking watchdog BDDK said it had extended through June 2021 the regulatory forbearance measures that allow local banks to record a loan as an NPL after a 180-day delay rather than a 90-day delay.

Also, the banks are to keep using the central bank’s average FX buying rate across the last 252 days while calculating their capital adequacy ratios.

On November 27, the central bank’s quarterly financial stability report showed that loans under close monitoring rose to about TRY360bn in addition to about TRY150bn of NPLs at end-September.

The NPLs and loans under close monitoring thus totalled TRY510bn, or 14.3% of the overall TRY3.56 trillion loan book, at end-September.

Fitch Ratings is considering Stage 2 loans (10.5% of sector loans at end-3Q20) and restructured loans (45% of Stage 2 loans) when assessing asset quality, it said on December 10 in its 2021 outlook for Turkish banks.

The Turkish banking industry’s overall equity rose to TRY573bn at end-October from TRY569bn at end-September.

The figures on problem loans do not include loans provided under the KGF or restructured loans since they are categorised as performing loans.

The latest financial stability report also showed that the outstanding loan volume under the KGF stood at TRY342.7bn at end-September.

On December 8, the KGF said it would provide TRY7.5bn worth of additional loans to small and medium sized enterprises (SMEs).

The local banking industry has found itself within a non-stop loan restructuring cycle since 2016.

On December 12, Istanbul-listed Akis Real Estate Investment Trust (AKSGY) said in a stock exchange filing that it obtained a loan from HSBC Middle East to repay an outstanding $23mn loan.