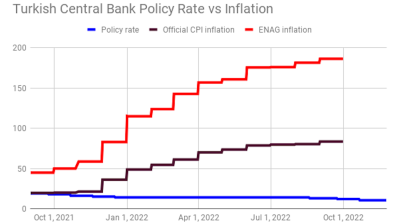 Turkey’s monetary policy committee (MPC) on October 20 introduced a jumbo policy rate cut, lopping 150 bp off the benchmark to take it to 10.5% (chart). Critics immediately spoke of more mumbo jumbo under the ‘Erdoganomics’ of the Turkish executive presidential regime—the move was made despite official inflation of 83% (as well as despite independent group ENAG's estimates that inflation is more than twice that) and the monetary tightening presently seen from conventional central banks around the world. Monetary oddity Turkey has thus taken another step into the unknown.

And another step is already on the cards. The MPC said in the accompanying statement released with the rate cut that it has evaluated making a similar move at its next meeting, scheduled for November 24, after which it might end the rate-cutting cycle with the benchmark at or around 10%.

On September 28, Turkey’s president, Recep Tayyip Erdogan, said during a televised interview that he was intent on the policy rate reaching the single digits by end-2022. Based on Erdogan’s guidance, the market expected a 100bp cut at each of the three MPC meetings that remained at the time he spoke.

Some Erdoganist business people, as well as some pundits, have lately spoken in favour of slashing the policy rate into the single digits without further ado and ending the constant talk of where rates will go. It seems that the MPC has decided to take the middle way. The dash for growth at all costs ahead of the coming year’s parliamentary and presidential elections in Turkey remains Erdogan’s big play, the lira, inflation and warnings about the dangers of boom-and-bust sugar highs be damned, it seems.On October 3, the Turkish Statistical Institute (TUIK, or TurkStat) released the official consumer price index (CPI) inflation in Turkey at the aforementioned 83% y/y for September, following on from the 80% announced for August.

Turkey’s policy rate remains idle on the sidelines while the government controls the monetary conditions via macroprudential measures and non-capital controls. In the latest move, the central bank said on October 18 that banks were now obliged to keep government papers amounting to 5% of their FX deposits at the central bank.

Commenting on the rate cut and on how officials are using measures and controls to keep a grip on the market, Cristian Maggio, head of portfolio strategy at TD Securities in London, said: “From an economic standpoint, I’m appalled. From a market angle, nothing moves as the central bank has full control of the FX market in this moment.”

The papers-to-FX-deposits requirement previously stood at 3% and it is to increase to 12% starting from 2023. Yields on government papers declined again as banks rushed to buy more.

As a result of the government sticks at the bankers’ backs, commercial loan costs are still declining while loan growth is accelerating again.

As things stand, global markets are taking another "false spring" prior to a November shake-up. The Erdogan administration managed to ride the August shake-up with only a 50 kurus loss against the USD. November's events are expected to be stronger.

Right now, the market expects the Fed to deliver another 75bp rate hike at its next rate-setting meeting, scheduled for November 2.

Thanks to the latest positive mood on the global markets, a limited recovery is visible in the Turkish central bank’s international reserves.