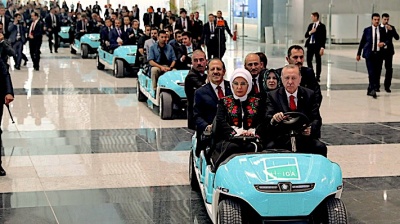 President Erdogan at the wheel leading a buggy convoy at the late October inauguration of Istanbul Airport.
By bne IntelliNews December 20, 2018

The switching of staff and services from Istanbul Ataturk Airport to the $12bn Istanbul Airport—which Turkey has ambitions to turn into the busiest mega-airport in the world—has been postponed, bianet reported on December 20.

It’s not to everybody’s surprise. As bneIntelliNews reported in early November, there was a certain amount of overhyping as to what progress had been made in constructing the airport when it was inaugurated by President Recep Tayyip Erdogan on October 29. Guests at the ceremony were presented with something of a Potemkin village.

The latest news is reportedly that Turkey’s General Directorate of the State Airports Authority (DHMI) has decided that making the transfer to Istanbul Airport at the end of December as planned is not feasible.

Minister of Transport and Infrastructure Mehmet Cahit Turan apparently attended a meeting with DHMI officials at which the decision for a delay was decided.

Bianet said no official statement on a postponement had yet been released but equipment transfers were expected to take place in March.

“God willing”
“God willing, we will have a precise date this time,” Sani Sener, CEO of Istanbul Ataturk Airport operator TAV Airports Holding, was cited as saying in an email to employees, advising that the move was now pencilled in for some time in March.

Lessees and subcontractors at Ataturk Airport would receive contractual extensions, he added.

Meanwhile, heavy rains on the night of December 18, flooded the main construction site at the new airport.

After the inauguration of the airport, it was unclear whether one or two runways were already available, or whether the plan was to eventually have five or six runways. So far, it has been running a very limited roster of services. By early November, Turkish Airlines was said to be running flights to Ankara, Antalya and Izmir, along with a connection to Azerbaijani capital Baku and one to the Turkish Republic of Northern Cyprus.

The consortium building the airport, IGA, is nothing if not ambitious for its mega-infrastructure dream, saying on its official website: “[The Istanbul Airport] defies the world with its size… [it] well overrides its competitors… Istanbul New Airport, 3.5 times as big as Peking Airport made up of 23 million square meters… New Istanbul Airport is worth 80 Eiffel Towers!”

Eighty Eiffel Towers could apparently be constructed with the 640,000 tonnes of steel earmarked for the construction of the airport.

The building of Istanbul Airport began in May 2015 and according to Bianet the target is to have all phases online by 2023, a year which in October brings the 100th anniversary of the foundation of the Republic of Turkey.

Erdogan, meanwhile, announced on September 16 that he was freezing new government investment projects in a fiscal squeeze seen as a response to the country’s economic turmoil. Infrastructure mega-projects to build bridges, ports, tunnels and railways—the likes of which have been symbolic of the outspoken Erdogan’s attempt to transform Turkey in the past 15 years, but which have been highly debt-fuelled—could be suspended under the move, with the president himself stating that only those which were more than 70% complete would be finished.

Its first three runways are designed to serve 100mn passengers annually by 2021, while there is a target of 200mn using six runways by 2029—almost double the capacity of the world’s busiest airport in 2017, Atlanta.

Scores of workers have so far perished in the creation of Istanbul Airport. On December 3, the Presidency Communication Center was reported as saying the number of deadly occupational accidents at the airport construction site between 2013 and 2018 was 52.

At least 38 workers had been lost in “preventable” work-related accidents and many more had been badly injured, Nihat Demir, the head of the construction workers’ union Dev Yapi-Is, told Human Rights Watch (HRW) on September 21. The transport ministry argued that the real figure was 30.

Workers’ unions claim that if rigorously assessed the death toll might rise since unregistered workers are among those who have lost their lives at the construction site.