Turkey's official headline inflation ends 2022 at 64%, base effect kicks in 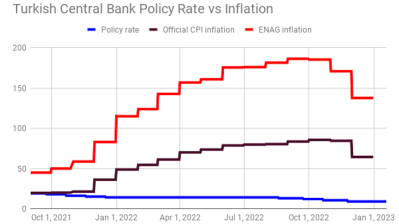 The official rate peaked in October at 86%, the highest headline rate recorded by Turkey since the 91% posted in June 1998. With the advent of December, the base effect from a year ago came into effect, pulling inflation down.

At 64%, Turkey remains in the seventh place in the world inflation league.

The guidance was based on the assumption that the Turkish lira (TRY) will not experience another crash. As of mid-afternoon local time on January 3, the USD/TRY pair was up 0.7% to TRY 18.74 from 18.6 on October 27.

If the USD/TRY remains stable, Turkey’s official inflation figure looks set to decline to the 30-40%s across 2023.

On December 22, at its latest rate-setting meeting, the central bank’s monetary policy committee (MPC) kept its policy rate constant at 9%.

Turkey’s policy rate, however, essentially remains idle on the sidelines. The government conducts monetary policy via macroprudential measures and non-capital controls. It does not need to cut the policy rate any further. Turkish President Recep Tayyip Erdogan demanded a single-digit policy rate and it was delivered at 9%.

The turbulence-free mood on the global market continues. Turkey’s five-year credit default swaps (CDS) remain below the 600-level, while the yield on the Turkish government’s 10-year eurobonds remains below the 10% level.