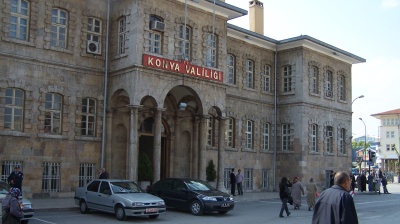 Konya City Hall in Anatolia. Soon to be the proud owner of a fruit & veg stall? / Niels Elgaard Larsen.
By bne IntelliNews February 7, 2019

Municipalities in Turkey are set to start selling fruit and vegetables as part of the country’s battle against double-digit inflation, Turkish Finance Minister Berat Albayrak said on February 7.

The extent of price gouging in Turkey is unclear but—ahead of the late March local elections—the Erdogan administration is making a big play out of targeting anybody it alleges is exploiting soaring prices by adding excessive amounts to their margins. Rather than face the suspicion and wrath of officials, some supermarkets have even stopped selling expensive agricultural produce altogether. On January 21, President Recep Tayyip Erdogan—lately granted emergency economic powers he is entitled to as the country’s first executive president—called on companies to cut profits if necessary to help consumers through Turkey’s challenging economic time.

Food prices—fuelled by poor weather including flash floods in big farming regions—surged 31% y/y in January, taking annual consumer price inflation up to 20.35% in the month from 20.30% at end-December. That’s down from the 15-year high of 25% seen last October following the height of the Turkish lira crisis, but officials are in a hurry to secure some sustainable downward momentum in the inflation rate.

“Food terror”
Albayrak, who has drawn up a programme for what he calls his “all-out war against inflation”, referred to "food terror" in a speech given to an exporters' meeting in Istanbul. "We have started taking short-, medium- and long-term steps on food inflation. We will not allow some to extend their hands and reach into the pockets of our citizens to take advantage of the situation," he was quoted as saying by Reuters.

Municipalities would start their sales of fruit and vegetables next week, he said, adding that "the harshest steps will be taken" against anyone found exploiting the high-inflation environment.

Details would be announced on February 8 of a programme to support greenhouses, under which low-interest loans will be provided by the state lender Ziraat Bank, according to the treasury finance ministry.

Policies are working: Albayrak
In recent interviews on Turkey’s struggle against its currency-crisis-induced economic turmoil, Albayrak—who says it is not inevitable that Turkey will find itself in a recession—has said that government policies are working and that inflation and interest rate decreases will follow as long as there is an alignment of fiscal and monetary policy and the implementation of structural reforms. Turkey’s benchmark interest rate was held at 24% at the last rate-setters’ meeting in mid-January.

On January 30, it was announced that Turkey’s score on The Heritage Foundation’s 2019 Index of Economic Freedom was 64.6, making its economy the 68th freest of the 180 assessed. Its overall score decreased by 0.8 of a point compared to its performance on the 2018 index, with declines recorded for judicial effectiveness and government spending exceeding modest increases in business freedom and labour freedom.