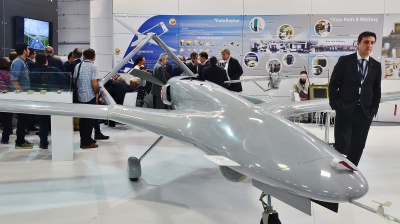 The Bayraktar TB2 caught the attention of Turkey’s military when from an altitude of 4 km it hit a trial target 8 km away using a Turkish-made guided rocket.
By bne IntelliNews May 15, 2019

Turkey now rivals the US and the UK as the world’s most prolific user of killer drones, according to a review by The Intercept of reported lethal drone strikes worldwide, the publication reported on May 14.

“The technology has been used by Turkey against ISIS [Islamic State] in Syria and along Turkey’s border with Iraq and Iran, where ever-present Turkish drones have turned the tide in a decades-old counter-insurgency against the Kurdistan Workers’ Party, or PKK,” it said.

“We are well past the time when the proliferation of armed drones can in any way be controlled,” Chris Woods, a journalist who has tracked drone use for more than a decade and director of the conflict monitor Airwars, reportedly commented. “So many states and even nonstate actors have access to armed drone capabilities—and they are being used across borders and within borders—that we are now clearly within the second drone age, that is, the age of proliferation.”

Efforts by Washington to control proliferation through restrictions on drone exports appear to have failed to slow down a global race to acquire the technology. The Intercept’s report noted that even if major drone developers like the US or China “decide to restrict the sale of armed drones, the genie is out of the bottle—the technology itself can now be replicated. That’s what Turkey has done”.

“Turkey,” the report said, “stands out as not only the most advanced new developer of drones but also as the only country to regularly use them on its own soil, against its own citizens.”

Selcuk Bayraktar might be seen as the “godfather” of Turkey’s killer drone programme. In 2005, the former MIT doctoral engineering student convinced a group of Turkish officials to attend a small demonstration of a homemade drone he had been working on. Bayraktar Makina is a firm that was started by his engineer father in 1984 to produce automobile components as part of Turkey’s effort to domestically manufacture cars. By the 2000s, the company had begun to focus on unmanned aerial vehicles.

In 2006, Bayraktar’s entry won a competition run by the Turkish military for an unmanned mini drone. Ankara ordered 19 of his mini drones to be deployed in the country’s southeast. By 2015, the Bayraktars conducted a successful demonstration of their most advanced drone, the TB2. It caught the attention of Turkey’s military. From an altitude of 4 kilometres, the drone hit a target 8 km away using a Turkish-made guided rocket.

His company is now the preferred drone manufacturer for Turkey. Bayraktar himself is seen in Turkey as a “drone hero”, a national celebrity.

Turkish TB2 drones killed 449 people in northwestern Syria in the first four months of last year, according to officials cited by the report.

Since later last year, however, Turkey has had to get used to the reality that the PKK is now also using drones, off-the-shelf models that can even be acquired on Amazon and adopted with improvised bombs. The PKK’s drones are reportedly yet to cause any human casualties.