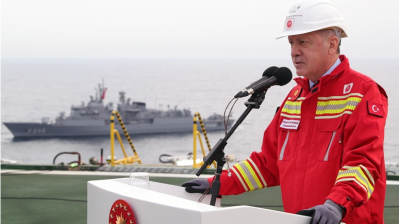 Turkey has raised its estimate of gas reserves in a field off its Black Sea coast to 405bn cubic metres (bcm) after discovering an additional 85bcm, President Recep Tayyip Erdogan said on October 17.

Erdogan said in August that the field contained an estimated 320 bcm of gas, making it the biggest natural gas discovery ever made by Turkey, which is almost entirely dependent on oil and gas imports, largely from Russia, Iran and Azerbaijan, though recent months have seen the country turn more and more to liquefied natural gas (LNG) shipments, with the US becoming a growing provider.

If the gas in the Tuna-1 field (likely to be renamed Sakarya) announced by Erdogan can be commercially extracted, it could transform Turkey’s dependence on energy imports, but there is considerable scepticism about the discovery.

In an October 13 article for Oilprice.com entitled “5 Reasons To Doubt The Turkish Giant Gas Discovery”, Viktor Kantona, a group physical trader at Hungary’s MOL energy group and an analyst at the Russian International Affairs Council, he wrote: “A little more than a month ago Turkey has victoriously announced that the Tuna-1 wildcat, drilled to a total depth of 4525 metres, has discovered the most prolific Turkish offshore field and concurrently the largest gas field in the entire Black Sea area. The discovery was hailed by President Erdogan as ‘the largest gas discovery in Turkey’s history’, presented in Turkish media as a ‘game-changer’, a ‘transformational event’ that could finally break the energy pessimism haunting the country for decades.

“The lauded discovery came on the back of Turkey continuing to assess the Eastern Mediterranean with the Cyprus-Turkey tensions still running high. Yet is Tuna (the field will most probably be renamed Sakarya) really that significant, can it really provide the foundation of a new deepwater offshore renaissance for Turkey?”

Kantona turned to how there is “No witness to back it [the discovery] up”, adding: “Most of the Black Sea’s major projects (or projects which were perceived to become significant) have taken place within a consortium that would inevitably include oil majors with substantial deepwater offshore expertise. Take the Han-Asparuh exploration block in Bulgaria (initially a consortium of OMV, Total and Repsol; the latter has already left the project) or the… Neptun Deep field offshore Romania (located just a 100km from Tuna-1), in almost all cases the project’s operator is an international major with a thorough knowledge of deepwater projects.

“Even the Turkish national oil company TPAO has previously preferred to team up with Shell or ExxonMobil to assess its Black Sea reserves. However, in the case of Tuna the Turkish NOC has spudded the well and assessed its reserves completely alone, creating an unprecedented event in the history of Black Sea exploration.”

The discovery, made by the Fatih drill ship about 100 nautical miles north off the Turkish coast, represented “a feel-good domestic story to sell in troubled times”, said Katona, adding: “Luckily Turkey has so far escaped the travails of the coronavirus’ second wave, crippling much of Eurasian economic activity. Domestic discontent has been brewing nevertheless as the Turkish economic miracle seems to be heading towards a drastic hit in 2020—the World Bank estimates that Turkey’s GDP will contract 3.8% year-on-year (although Berat Albayrak, President Erdogan’s son-in-law who happens to be the Economy Minister recently predicted a GDP growth of 0.3% in 2020, preferring to use the PPP numbers although even Turkey’s purchasing power parity might soon go negative).

“The tension flare-up in Nagorno Karabakh might serve a temporary distraction from the country’s economic problems yet much more will be needed to placate people’s concerns. The Tuna discovery will evidently not suffice in and of itself, however, it might serve as a useful element of government PR.”

More than a quarter of Turkey’s long-term gas contracts expire next year, including imports via pipeline from Russia’s Gazprom and Azerbaijan’s Socar and an LNG deal with Nigeria.

Turkey has said that given the Tuna-1 discovery, it will be expecting gas suppliers to be more flexible on pricing in renewing contracts.