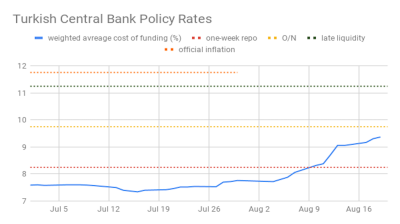 Some analysts wonder whether Turkey will cut its official inflation figure to close the negative yield gap rather than hiking its policy rate.
By Akin Nazli in Belgrade August 20, 2020

Keeping up its strategy of tightening by stealth with backdoor moves, and perhaps a little emboldened by the previous day’s “good news” of a Turkish energy discovery in the Black Sea that lifted markets, Turkey’s central bank monetary policy committee (MPC) on August 20 kept its main policy rate (the one-week repo) at 8.25%. It did so despite loud warnings from the market that the failure to bring in an outright and formal rate hike would likely expose the battered Turkish lira (TRY) to more volatility.

As a result of the MPC decision, the 9.75% overnight lending rate remained 150bp higher than the headline rate and the late liquidity window rate 150bp higher at 11.25%.

The Turkish government staged a “good news” theatre to set the scene for holding the policy rate constant. On August 19, President Recep Tayyip Erdogan said that he would on August 21 deliver a positive announcement so significant that it would amount to “the beginning of a new era” for the nation. At the same time, sources briefed Bloomberg that Turkey, which is almost entirely reliant on energy imports, had made an energy discovery in the Black Sea, most likely of natural gas.

While Erdogan talked up prospects for Turkey’s news flow, government-run lenders simultaneously sold dollars on the USD/TRY trading board and the exchange rate, as a result, pressed through the 7.20s. Prior to that change of direction it was testing the few days old 7.40 trench where its all-time low has lain since early this week. Following the rates announcement, by around 17:00 Istanbul time, the lira was 0.75% weaker versus the dollar on the day at 7.33. Yields on two-year local bonds moved up seven basis points to 13.33%.

The decision to keep the policy rate constant was entirely expected. President Recep Tayyip Erdogan, who it is widely believed runs monetary policy and is wedded to his unorthodox ‘Erdoganomic’ theory that high rates cause inflation, continues to make much of his determination to avoid higher rates despite the howls of protest from economists following orthodox economic theory that the dire path of the lira demands Turkey swallow clear and direct monetary tightening.

As for the “good news”, only mainstream media, local and global, stick with the story that Ankara could possibly have successfully hidden a major development supposedly set to dramatically change Turkey’s destiny until just a few days before heaven is delivered to the spot on Earth where Turkey resides.

‘Got t-shirt, eaten the popcorn’

“Idiotic move by the CBRT [Central Bank of the Republic of Turkey]—they learned nothing from [the lira crisis of] 2018 or it was just re-affirmed that Erdogan still runs monetary policy. We have seen the movie, got the t-shirt, eaten the popcorn,” Timothy Ash of Bluebay Asset Management, a fixed income investor, wrote in a note to investors.

Ash has generally supported Erdogan’s ruling Justice and Development Party (AKP) since it was established in 2002, but, notably, he is increasingly even questioning the future of the Erdogan government.

Given the backdoor tightening strategy, the CBRT’s weighted average cost of funding, which excludes USD- TRY swaps with local banks, reached 9.37% as of August 19 from 7.34% as of July 16.

Technically, the authority, as it ceases to provide funding at its cheapest rate to put some kind of brake on the lira, has the option to raise its open market operations funding rate to the late liquidity window’s 11.25%.

Investors are not enamoured of backdoor liquidity steps as against formal tightening—what looks like tightening today can be reversed tomorrow with little notice or explanation. “The resistance to hiking interest rates despite market forces suggesting otherwise shouldn’t come as a shock to anyone,” Bloomberg cited Simon Harvey, a London-based market analyst at Monex Europe, as saying, adding: “Whether this was the right decision by [CBRT] governor [Murat] Uysal, only time will tell.”

At the central bank’s one-month repo auctions conducted according to the traditional auction method, in which banks set the rates with their bids, rates have shaped around 11.25%. This does not mean that 11.25% is enough, but it suggests that over the next month the cost of funding is supposed to approach the late liquidity rate.

With foreign portfolio investors still selling lira assets at whatever price they can fetch, presently the real actor in the destiny of the lira is locals. And they still have no attractive deposit rates that would encourage them to keep their money in the currency.

Also on August 20, the central bank said in a statement that it has hiked mandatory reserve ratios for commercial lenders for both lira and FX deposits. The changes are expected to withdraw TRY17bn ($2.3bn) and the equivalent of $8.5bn in foreign currency and precious metals from the market, a step that will also boost the central bank’s reserves, Bloomberg noted.

The announcement sent another message that the authority will keep deploying all available non-interest tools to deal with the lira depreciation.

The next scheduled MPC meeting will be held on September 24. An emergency meeting remains a possibility depending on the course the lira takes from here.

The lira is the third-worst performer in emerging markets to date this year with a loss of around 19% against the dollar. Its three-month implied volatility is the world’s second highest after Brazil’s real.