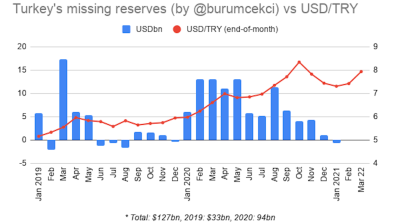 To no-one’s surprise the Turkish lira (TRY) dropped like a stone when Asian markets opened on Monday March 22 following the shock firing of a third central bank governor in less than two years by President Recep Tayyip Erdogan just prior to the weekend. With investors concluding that the central bank by now has zero credibility, the TRY tested 8.48 against the USD, plummeting from the 7.21 seen at market close on March 19.

The day’s nadir was short of the USD/TRY rate of 8.59 seen last November 6 prior to the replacement of the previous central bank governor and the finance minister. Moreover, as March 19 drew to a close (Istanbul time), the lira had staged a recovery to 7.7675, to trade around 7.7% lower against the dollar, following a day that, analysts said, saw Turkey’s government-run banks intervene to push the rate below the 8.00-level. The benchmark BIST-100 index on the Borsa Istanbul, meanwhile, finished March 22 down by 9.79% at 1,379.

Turkish lira volatility moved to its highest level since 2018.

“It will be interesting to see the price in terms of lost FX reserves in terms of intervention. Likely billions of dollars used overnight/today,” Timothy Ash of BlueBay Asset Management said in a note to investors.

“State banks and presumably central bank have been selling dollars and have got the lira back below 8,” he added.

As traders attempted to come to terms with Erdogan firing a central bank chief who, with Turkey stuck on the edge of another balance of payments crisis, was seemingly given the strongman’s permission to use monetary firepower to fight soaring inflation and defend the lira, it was raining reports from global financial institutions that carried recommendations for the closing of long positions in TRY-related instruments.

All eyes were on Turkey.

Malaysia Airports Holding and hospital operator IHH, which have subsidiaries in Turkey, were also hit.

Blood was drawn on all Turkish asset markets from stocks and domestic debt papers to eurobonds and 5-year credit default swaps (CDS).

Turkish lira swap rates in London leapt to over 100%.

A big headache is that the lira positioning of hedge funds and real money funds recently reached levels close to the record levels seen in 2017 (chart below by BofA). That means they have too much lira to short the currency.

The stock market circuit breaker, which last came into effect on the Borsa Istanbul’s benchmark BIST-100 in August 2020, was activated twice during the day, at declines of 5% and 7%, before the index finished the day with a d/d loss of almost 10%.

All shares on the stock exchange were down 9-10% d/d and there were no buyers, making it impossible to offload Turkish papers and take flight.

Borsa Istanbul warned market players that it is watching all transactions, particularly short-sales.

Turkey does not provide information on its interventions in the USD/TRY market but it also cannot anymore deny that it has spent around $127bn in desperate backdoor efforts via government-run banks to defend its currency since the beginning of 2019.

So far, no additional capital controls have been announced to deal with the crisis on markets caused by Erdogan making it clear that it is his monetary decisions alone that apply in Turkey (“Erdoganomics”, as any Turkey watcher knows by now, includes the delightful premise that high interest rates cause inflation to go up, contrary to the opposite theory held by conventional economists the world over). The new central bank governor, Sahap Kavcioglu, an Erdogan party loyalist who spoke out against his predecessor’s aggressive tightening, held a closed-door call with local banks on March 21. It is thought that the banks were informed of what they are expected to do in the upcoming shaky period.

At the moment, the government seems to be applying its well-known backdoor intervention method. How much FX is left in its arsenal will be closely watched in the coming weeks. Markets on March 22 took some assurance from finance minister Lutfi Elvan issuing a statement saying the country would continue to prioritise free-market policies. That was seen by global investors as an indication the country would refrain from using capital controls. As things stand, there is also no sign of an emergency rates meeting that would be used to lower the benchmark rate of 19% set by the rate-setters that worked under the fired Agbal (including the 200 bp hike they brought in on March 18, it is the highest level seen among big economies).

As of March 12, the net FX position of the government-run trio of banks, namely Ziraat, Vakifbank and Halkbank, stood at $145mn. This figure was in negative territory at as high as $12bn in August 2020.

How short the state banks are planning to go now is questionable.

At the central bank, there was $92bn worth of gross international assets, including $39bn worth of gold and $53bn worth of FX, as of March 12. Net reserves remain in deep negative territory when swap liabilities are taken out.

The central bank also sells USD/TRY future contracts on Borsa Istanbul’s derivatives market (VIOP). Its short position stock stood at $986mn as of March 12. This figure was as high as high as $8bn in 2018.

On March 22, Borsa Istanbul hiked the upper limit on currency futures at the VIOP to 20% from 10%, asking higher margins to short Turkish lira.

Overall figures on the available FX and gold in the Turkish financial system show an amount equivalent to what the government has burnt through since the beginning of 2019.

How much of the reserves are usable is another question that needs addressing.

“Our conservative estimate suggests about $30bn could be cobbled together for a lira defence,” Eurasia Group said on March 20 in a note.

“They have USD92bn in gross reserves, including USD38bn in gold. People say only USD20-25bn is freely available, but the USD38bn in gold reserves can be mortgaged to make it liquid,” Ash wrote in an emailed note to investors.

“Where is the $128 billion?” posters plastered across Istanbul ask Erdogan

Turkey’s key rate held but central bank language ‘indicates premature easing is ahead’
“Where is the $128 billion?” posters plastered across Istanbul ask Erdogan
ISTANBUL BLOG: Portfolio outflows decline but Turkey not out of the woods yet