Turkey burnt through estimated $11bn of reserves in May 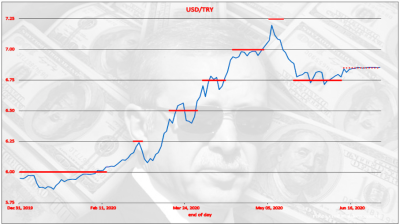 The Turkish central bank’s open swap stock jumped to $52bn at end-May from $36bn a month ago, data from the regulator showed on June 26.

There is also now a net accounts payable issue under the predetermined short-term net drains on foreign currency assets item, which rose to $3.42bn at end-May from $2.24bn a month ago. The figure stood at zero in April 2019 and rose to $1.07bn in February 2020.

Prior to the coronavirus (COVID-19) crisis, there were numerous media articles suggesting Turkey’s net international reserves had entered negative territory.

As of May, the $55.3bn worth of open swaps and net accounts payable makes a sum bigger than the central bank’s $52.8bn worth of gross FX reserves.

As of May, when $22.bn worth of predetermined outflows over FX loans, securities, and deposits are included, the central bank’s predetermined short-term net drains on foreign currency assets stood at $77.5bn versus $90.4bn worth of overall international assets (FX plus gold).

When contingent short-term drains (collateral guarantees plus banks’ reserve requirements held at the national lender) are added to the calculations, the central bank’s overall short-term drains fell below its overall gross international reserves in April.

As of May, the central banks’ overall short-term drains (predetermined plus contingent) stood at $105.2bn.

It is interesting that the central bank increased its gold reserves to a record 21.3mn ounces in May from 20.4mn ounces a month ago, while its net FX reserves remain in negative territory.

Turkey’s net reserves should have risen by $90.9bn since the beginning of 2019 to the end of May. However, they have risen $2.6bn, Haluk Burumcekci of Burumcekci Consulting wrote on June 29 in his daily bulletin.

The $88bn, a discrepancy, is thought to have been sold via state lenders to support the embattled Turkish lira (TRY).

Calculations suggest that Turkey burnt through $55bn worth of FX reserves in January-May following $33bn in 2019.

In April and May this year, about $11bn worth of reserves were burnt through each month.