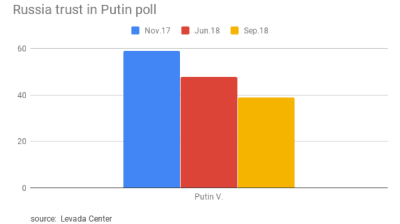 Trust in Putin rating plunges to 39% due to unpopular pension reform
By bne IntelliNews October 9, 2018

A new survey by independent pollster the Levada Center asking which politicians people trust the most has seen trust in President Vladimir Putin plunge to 39% in September this year from 59% in November 2017, Levada said on its website.

However, in Levada’s last monthly benchmark Putin “approval” rating poll, as opposed to the “trust” poll, Putin’s ranking was relatively unaffected, though it has sunk from 70% in August to 67% in September. The October approval results will be out soon, but are likely to show that Putin remains very popular, although his image has clearly been bloodied by the pension reform, and pundits expect his approval ranking to fall as well in October’s poll.

Putin’s popularity has taken a hit by pushing through a hike in retirement ages that he signed into law this week. The retirement ages were 60 years for men and 55 for women, set in the USSR back in the 1930s when average life expectancy was 40 years. They have now been increased to 65 for men and 63 for women.

The reform was necessary as the number of workers is falling thanks to a demographic dent hitting the population now, caused by the economic turmoil of the collapse of the Soviet Union from 1991: one pensioner used to be supported by two workers, but the ratio has fallen close to 1:1 now. Russian First Deputy Prime Minister and Finance Minister Anton Siluanov said earlier this year that the budget would not be able to afford to pay for pensions if reforms were not made, but the age hike has been extremely unpopular.

The announcement was made in the midst of the World Cup in July by Russian Prime Minister Dmitry Medvedev, but led to widespread, albethem peaceful, protests across Russia. The most newsworthy protests were held in Moscow and led to limited altercations between the police and demonstrators.

The problem with hiking the retirement age is few “pensioners” actually retire on reaching the qualifying age. Their pension is better understood as a second income most Russians look forward to that has a major material impact on their quality of life, which makes increasing the pensionable age closer to actual old age a major blow. Indeed, in some regions life expectancy for men is less than the 65 year threshold for “retirement”.

The increase in retirement ages is long overdue and together with an increase in VAT from 18% to 20% introduced at the same time is the first time Putin has directly increased the burden on the population since he took office in 2000.

Ironically the popularity of Medvedev, who is technically responsible for the decision and actually made the announcement, has been relatively unaffected, with trust in him falling one percentage point from 11% to 10% over the same period.

Defence Minister Sergei Shoigu, long the second most popular politician in Russia after Putin, also took a hit with his popularity falling from 23% to 15%.

Trust in opposition firebrand and Liberal Democratic Party of Russia (LDPR) leader Vladimir Zhirinovsky actually rose by one point to 15% in the period, to make him the second most popular politician in Russia. Recently re-elected Moscow mayor Sergei Sobyanin also gained one point but remains in single digits with only 4% of Russians saying they trust him.

Medvedev may have seen his trust rating stay more or less the same but he also has the dubious honour of leading the sister poll that asked: “which politician don't you trust”, with a score of 31%, up from 19% over the same period. Oddly enough Zhirinovsky is also second in that poll and also saw his score rise there too from 18% to 20% over the same period. Putin was third and saw his “don’t trust” rating increase from 7% to 13% in the same period.