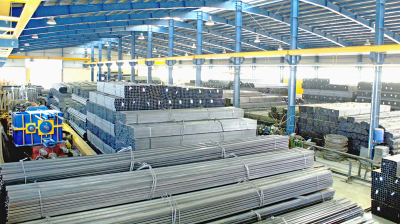 Steel products stacked up in a factory in Isfahan, central Iran.
By bne IntelliNews May 9, 2019

"Today's action targets Iran's revenue from the export of industrial metals—10 percent of its export economy—and puts other nations on notice that allowing Iranian steel and other metals into your ports will no longer be tolerated," the US president said in a statement.

Trump said Tehran "can expect further actions unless it fundamentally alters its conduct". He added that he looks forward to "meeting with the leaders of Iran in order to work out an agreement and, very importantly, taking steps to give Iran the future it deserves".

Iran’s leaders have shown no sign of any willingness to meet with Trump, saying he owes their country an apology for the “illegal” sanctions regime targeted at the Islamic Republic.

The US is unilaterally attempting to throttle Iran’s economy in order to force concessions on its Middle East activities and policies. The sanctions have thrown Iran back into recession while causing a collapse in the value of the Iranian rial (IRR) and driving up inflation.

Trump’s executive order targets the Iranian iron, steel, aluminium and copper sectors in hopes of denying the Iranian government the ability to "provide funding and support for the proliferation of weapons of mass destruction, terrorist groups and networks, campaigns of regional aggression, and military expansion," according to Trump. "It remains the policy of the United States to deny Iran all paths to both a nuclear weapon and intercontinental ballistic missiles, and to counter the totality of Iran's malign influence in the Middle East."

Where Iran’s nuclear programme is concerned, the UK, France, Germany, Russia and China, unlike the US remain committed to the 2015 nuclear deal.  The other matters cited by Trump should be discussed and dealt with separately, they say. Critics argue it is the US that is acting like a “rogue” nation, rather than Iran. The major powers that remain signed up to the nuclear deal, as well as UN atomic inspectors, say Iran has remained in compliance with the accord since it came into effect at the start of 2016 and despite the economic attack launched by the US.

US, Iraqi soldiers at air base ‘had nearly eight hours advance warning of Iran missile attack’

American and Iraqi soldiers at Ain al-Asad air base in Iraq are reported to have scrambled to move personnel and weaponry to fortified bunkers nearly eight hours before Iran’s January 8 missile ... more

US President Donald Trump said on January 7 that America had killed a "monster" with the drone missile strike on top Iranian general Qasem Soleimani. Soleimani—who was regarded as Iran’s ... more