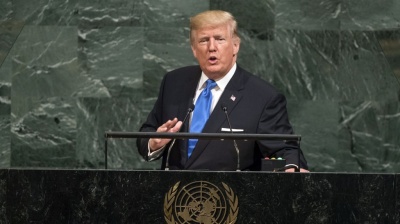 US President Donald Trump cancelled this weekend’s visit to Poland, saying on August 29 he is staying to coordinate the response to “monster” hurricane Dorian expected to make landfall in Florida on September 2.

Vice President Mike Pence will travel to Poland instead in what is a let down for the ruling Law and Justice (PiS) party, which hoped Trump would give extra weight to the state events commemorating the 80th anniversary of the start of World War Two.

Poland is six weeks away from the crucial election that PiS hopes to win to ensure another four years in power. While clearly leading in all polls, the ruling party’s confidence in winning another outright majority in the parliament has weakened recently in the wake of scandals, involving the parliament’s speaker and justice minister.

“The trip is postponed, not cancelled,” Polish presidential minister Krzysztof Szczerski said in reaction to Trump’s calling off his visit.

Presidents of Poland and Germany Andrzej Duda and Frank-Walter Steinmeier will make speeches in Warsaw during the commemoration event. Pence will also speak but the programme of his visit will be different than Trump’s, Szczerski said.

The President of the European Council Donald Tusk – Poland’s former prime minister and an ardent critic of the PiS government – will also be present.

Poland was expected to sign a security and cooperation agreement relating to the development of 5G mobile technology as part of Trump’s visit. More details on deploying US troops in Poland were also expected.

On August 28, a group of former Polish ambassadors sent an open letter to Trump asking the US president to rebuke the PiS government for threatening democracy in Poland.

"You are coming to a country where the rule of law is no longer respected," the former diplomats wrote. Warsaw is at odds with the EU over the reform of the judiciary, among other issues.

Poland’s state-controlled refiner PKN Orlen will get involved in the Ostroleka power plant project it acquired via the purchase of utility Energa “only if it switches to gas,” the company said ... more

Poland will reopen hotels and malls from May 4 in the subsequent stage of lifting restrictions introduced to contain the coronavirus (COVID-19) pandemic, Prime Minister Mateusz Morawiecki said on ... more