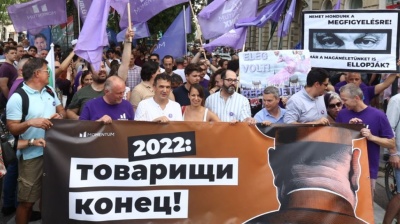 Demonstrators carry a banner with the caption Товарищи Конец (Comrades, it is the end), a reference to the iconic election campaign poster of the conservative MDF during the 1990 election.
By bne IntelliNews July 27, 2021

Several thousand people took to the streets in Budapest on July 26 in protest against the Pegasus wiretapping scandal.

The government has refused to either confirm or deny the accusations made on July 20 that it used the Israeli spyware to illegally spy on journalists and political opponents.

The ruling Fidesz party boycotted the meeting of parliament’s national security’s meeting on July 26, which had been convened by the opposition, calling the situation around Pegaus a politically motivated hysteria.

Interior Minister Sandor Pinter, one of the strongest allies of Orban and longest-serving minister, showed up, but did not have to respond to any questions on the possible purchase and use of Pegasus spyware as the committee could not begin its work without Fidesz MPs being present.

Opposition parties say the abstention of the ruling party from the committee meeting equals a guilty plea. The government pretends as if there was no scandal but only scare-mongering, while they are using every means to avoid political responsibility, the centre-right Jobbik leader of the committee Janos Stummer told reporters.

Hungary’s government could have procured the spyware legally, but the main question is if it abused its powers by wiretapping journalists and politicians, another MP said.

Opposition parties will make efforts to convene the committee again.

Files leaked to Amnesty International and the Paris-based journalism non-profit Forbidden Stories  revealed the phone numbers of 300 Hungarians in a database of some 50,000 worldwide who may have been targeted for hacking by clients of the Israeli spyware firm NSO. So far 10 Hungarian people have been identified as being targets, including lawyers, one opposition politician and five journalists.

The phone number of former state secretary of the Orban government, Attila Aszodi, was also on the list, investigative outlet Direkt36, the Hungarian Pegasus project partner reported recently. Aszodi was responsible for the expansion of the Paks nuclear power plant until early 2019. He became a target in late 2018 after conflicts with his superior, the minister in charge of the Paks expansion, Janos Suli. Aszodi opposed the hastened construction of the project.

Opposition party Momentum organized a demonstration in Budapest on Monday. Protestors marched from the Terror Museum on Andrassy revenue to the Fidesz headquarters nearby. Demonstrators carried a banner reading Товарищи Конец (Comrades, it is the end), a reference to the iconic election campaign poster of conservative Hungarian Democratic Forum, the winner of the country’s first free election after the regime change.

To many, the wirestapping scandal evoked memories of the darkest period in Hungarian history. Some chanted AVH, AVH, the dreaded Secret Service of the 1950s.

Speakers on the stage set up in front of the Fidesz HQ vowed to hold accountable those responsible for the surveillance of Hungarians if they win the election in 2022.

First official results from Bosnian elections put nationalists ahead after exit polls predicted losses
30 minutes ago
US sanctions Russia’s CBR head Nabiullina and other officials
1 hour ago
Russia prepares for new attacks against Ukraine from Belarusian territory
1 hour ago
Blue and yellow returns to Lyman, Borova and Mikhailivka as Ukraine liberates settlements in east and south
1 hour ago
Bulgaria’s fragmented parliament unlikely to produce stable new government
9 hours ago