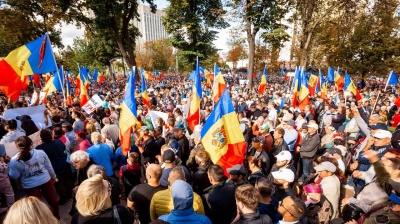 Moldova’s ruling Party of Action and Solidarity (PAS) was elected by a landslide in 2021, but since then the Western-oriented government has come under pressure because of the strains of coping with high inflation, increased energy prices and the impact of the war in neighbouring Ukraine, including the arrival of hundreds of thousands of refugees.

Participants in the march called for the resignations of Sandu and Prime Minister Natalia Gavrilita’s government.

Shor, sentenced in 2017 to 90 months in jail for fraud and money laundering (a ruling appealed but never re-judged), spoke by Skype to the protesters summoned by his party in front of the presidency in Chisinau, on September 18.

Dinu Turcanu of the Shor Party addressed the rally in person, saying the crowd had gathered “to take on the future of this country. The people of the Republic of Moldova, who put those from PAS in office, have every right to hold them accountable.

“The Republic of Moldova is in clinical death, and those who will revive it are the people who came here today. Moldova will regain its dignity. We have only one condition: Down with Maia Sandu!” added Turcanu, according to a party statement.

The protest organisers have set up tents on the square outside Moldova’s parliament and say they intend to continue the protest “non-stop” to push for Sandu’s and the government’s resignations.

Shor said the number of people who will camp out in tents will be limited, but every Sunday massive protests will be organised in the same place.

Turcanu claimed that tens of thousands of people took part in the protest and that many more were prevented from attending. However, according to the Moldovan police, quoted by Deschide.md, the protesters numbered around 6,500.

Shor, one of the main suspects in Moldova’s so-called ‘$1bn bank frauds’, fled the country in 2019. However, he still has a following within Moldova, and a recent poll showed that the Shor Party would take 15.5% of the votes if an election were held now.

The protest took place just days after another opposition bloc, the Bloc of Socialists and Communists filed a no-confidence motion against the government, and the two appear to be coordinated.

Neither the motion nor the street protests can realistically succeed in overthrowing the pro-EU authorities, given the PAS’ majority in parliament, but they will add to the tensions in Moldova that are likely to grow as utility companies start sending out higher energy bills during the colder months towards the winter.

Moldova’s economy contracted for the second quarter in a row in Q2, when it edged down by 1.3 q/q, and the government recently revised its growth forecast for this year to zero. Meanwhile, annual inflation reached 34.3% in August, and the government has limited capacity to address the social impact.