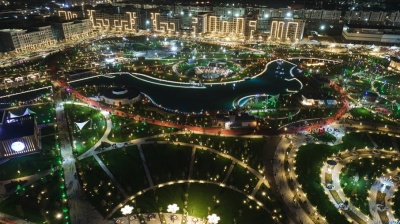 Over 300 investors, diplomats and international bankers attended the Tashkent Economic Forum to catch up with the progress the government has made with privatisation and reform. / wiki
By Muzaffar Ismailov in Tashkent September 30, 2021

Uzbekistan’s opening up has been a hot story for the international press in the last few years. The country has been doing its best to demonstrate the effectiveness of reforms initiated by incumbent leader Shavkat Mirziyoyev. With less than a month left befor the next presidential elections, Mirziyoyev’s government organised a massive international Economic Forum 2021 held in Tashkent on September 29 to showcase progress made so far and the privatisation of SOEs and banks already achieved.

The event, held with the support and high-level participation of the World Bank and the Asian Development Bank (ADB), brought together in an in-person setting around 300 participants -including top members of the Uzbek government, international business and financial communities, international and regional multilateral development institutions, policymakers and NGOs.

According to Anna Bjerde Vice President, Europe and Central Asia World Bank (WB), no country in the world has achieved so much in such a short space  of time as Uzbekistan has.

Next generation of reforms

Bjerde shared her view on what the government should focus on next. The first step is the continuation of diversification, as the country is still dependent on agriculture.

Even though there has been job creation from the economic growth of recent years the unemployment level remains high at about 10.5% and more needs to be done to boost economic expansion. The most important step within the next generation of reforms, according to her, is to expand the role of the private sector. Another direction that the government should focus on is natural resources.

“A lot of opportunities have already launched in renewable energy.  The government aims to reach 25% renewable energy in the near future. But natural resource management needs more attention when it comes to pollution and water management,” Bjerde said.

Public debt is huge but sustainable

The IMF Mission head for Uzbekistan Ron van Rooden said that the Fund has observed a rapid increase of public guaranteed debt over the past few years, adding that the organisation was projecting it at close to 40% of GDP. Debt is mainly used in the power sector and poverty reduction.

“The increase in public debt was quite rapid. SOEs and state-owned banks were issuing more external debt”, he said.

According to Uzbekistan’s Deputy Prime Minister Jamshid Kuchkarov, who is also the Minister of Economic Development and Poverty Reduction, over the past five years, the debt to GDP ratio increased significantly, But since the beginning of 2021, the borrowing rate has been reduced. The government has also approved a limit on total state debt of 60% of  GDP.

“Now we are going to rely on private investment”, added Kuchkarov.

Bjerde, meanwhile, noted that even though the overall debt was high, it still remained sustainable. It was still generating benefits for the country. Uzbekistan was one of the very few countries in the world to put in positive economic growth amid the pandemic. Bjerde also urged the government to keep the debt management transparent.

Deputy PM Kuchkarov outlined two large privatisation deals that have happened in the country since the sell-off programme was announced.

Another huge asset that went under the hammer was Ipoteka Bank (Mortgage Bank), the activity of which is mainly focused on mortgage financing. The new owner of a 75% stake is Hungary’s OTP Bank.

One of the biggest deals in the coming years may be the sale of a 10-15% stake in uranium and gold miner Navoi Mining and Metallurgical Combine. Kuchkarov said that the transaction could be completed in 2024.

"There is no concrete plan yet, but we may come to it in 2024," he said, adding that the company first needs to be restructured and reform its accounts in line with international standards.

Kuchkarov added that the government was not in a hurry to sell off its assets. “The first thing we do is restructuring, followed by preparation for privatisation. And only after that do we consider a sale,” he said.

“The government this year will hold two IPOs and SPOs,” Kuchkarov noted without disclosing the details. “By 202, 10 large companies will hold IPOs and by 2025 there will be 20 big names”.

Asked whether the government was considering the sale of assets through foreign exchanges Kuchkarov answered: “We are considering listing both on Tashkent exchange and on international exchanges. We will hire nearly 100 top-level managers who will deal with privatisation issues. We are not in a hurry to conduct privatisation. But we are in a hurry for transformation and preparation.”

According to Timur Ishmetov, Finance Minister, privatisation is the best tool to minimise the potential fiscal risk of SOEs. “We have a lot of SOEs in many sectors of the economy. The risks include getting less than projected tax payments and the extended burden on the budget, and we may have expenses on loans,” he said.

Sun-drenched Uzbekistan on the verge of a renewables boom
Uzbek President Mirziyoyev backs down in face of protest, cancels Karakalpakstan constitutional status change
Uzbekistan declares state of emergency in Karakalpakstan over Nukus protests

US and Chinese slowdown will tip the world into recession, says IIF
1 day ago
NEO: Rising in the East, Setting in the West: Russia strengthens trade with Global East
2 days ago
Stagflation fears continue to rise
3 days ago
The economics of herding in Mongolia
4 days ago
EXPLAINER: how a price cap on Russian oil might work
4 days ago