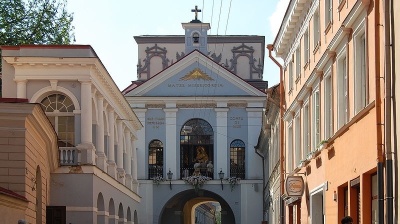 Swedbank expects GDP to shrink in all three Baltic states in the second half of this year.
By bne IntelliNews October 25, 2022

Swedbank has maintained its Lithuanian GDP forecasts for 2022 and 2023 intact compared to those published in August, at 2% and zero, respectively, BNS, a Baltic newswire, reported on October 25. Meanwhile it has adjusted downwards its 2023 forecast for Estonia to zero growth.

The bank's economist Nerijus Maciulis says that economic contraction is forecast for the second half of this year and the first half of next year in the Baltic states.

"This year, we still saw economic growth but, of course, the growth took place in the first half of the year, and we expect the GDP to shrink in all Baltic states in the second half of this year and it will continue until the middle of next year. Then recovery is expected, which will bring the overall result for next year close to zero," Maciulis said at the forecast presentation.

"We had a more dramatic cut in our forecasts for 2024. We believe the energy shock, the drop in the purchasing power and the rise in interest rates we are now experiencing, with the latter expected to slow the housing market considerably, will continue to be felt in 2014, which will result in growth returning back to its long-term trend and will be somewhat more modest than we would like," he added, BNS reported.

Meanwhile, inflation is expected to be higher, the economist said.

"It will be higher than we projected in the summer, partly due to the fact that we are also increasing the average wage forecast, which has to do with a higher increase in the minimum monthly wage than we had forecast," Maciulis said.

As far as Estonia is concerned, Swedbank Estonia assumes that the Estonian economy will not shrink or grow as a 12-month average in 2023, although a recession may be witnessed at the beginning of the year.

In the previous forecast published in August, Swedbank expected 0.5% GDP growth for Estonia for 2023. The bank has now adjusted the forecast for 2023 to zero.

However, Swedbank did not change the economic growth expectation for Estonia in 2024, leaving it at 2.5%.

Tonu Mertsina, the bank's chief economist, noted in the bank's blog that while Estonia's GDP grew by 2.4% in the first half of this year, the second half of the year is set to be considerably worse.

"The economic sentiment has fallen sharply, with weakening external demand reducing exports of goods and manufacturing output, whereas a fall in household purchasing power has sharply curtailed retail sales growth. Rising costs, including higher energy prices, at a time when demand has weakened, are putting pressure on companies' liquidity and competitiveness," the economist said, adding that these trends will also strengthen in the coming months.

According to Swedbank, the unemployment rate should increase somewhat in the coming quarters, but then fall again as the economy starts to recover.

"Wage growth is supported by labor shortages, the higher minimum wage, wage increases in the public sector and strong wage pressures from employees who do not want their standard of living to fall significantly due to soaring inflation," the economist said.