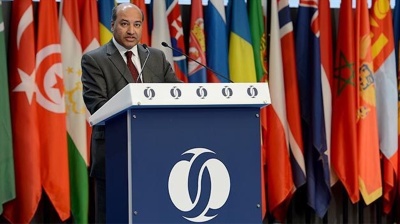 Sir Suma Chakrabati has ended his two terms at the helm of the European Bank for Reconstruction and Development (EBRD) after eight years during which he expanded the bank’s membership and refocused on to green investment.

Adopting the Green Economy Transition (GET) strategy in 2015, under which the EBRD pledged to increase green financing to 40% of its annual business volume by 2020, was perhaps the biggest step of Chakrabati’s years as president of the development bank. At the time, this goal was seen as extremely ambitious, yet it has already been exceeded twice, in 2017 and 2019, when green financing amounted to 46% of the EBRD’s overall investment volume.

Speaking in one of his final speeches as EBRD president on June 30, Chakrabati said that putting climate and environmental action at the core of the EBRD’s activity was a key part of his legacy.

“The results speak for themselves. Between 2012 when I arrived at the EBRD and 2019, annual green finance almost doubled from €2.4bn in 2012 to €4.6bn in 2019,” he told an online conference, The Green Economy Transition and Multilateral Development Banks.

“The green finance ratio increased from 27% of €8.9bn to 46% of €10.1bn. Climate adaptation finance more than trebled to half a billion euros. And beyond the investment numbers, carbon emissions reductions linked to our green activity over this period are estimated to amount to 53mn tonnes per year. That’s the equivalent of the annual emissions of countries such as Bulgaria, Hungary, Norway or Portugal.”

The EBRD has been criticised by some environmental NGOs for its support for natural gas projects, in particular the TAP and TANAP pipelines that will bring Azerbaijani gas to Europe. The development bank defended such investments, however, as diversifying European energy supply and reducing emissions compared to coal.

Another big change under Chakrabati’s leadership was expanding the bank’s shareholding – it has 71 shareholders, now including Asian heavyweights China and India – and its operations. Originally focused on the post-socialist transition economies of emerging Europe, the last eight years have seen an expansion into the southern and eastern Mediterranean (Semed) region, starting with Egypt, Jordan, Morocco and Tunisia from September 2012. It now invests in a total of 38 emerging economies.

A shareholders vote on whether to expand into sub-Saharan Africa had been planned for the 2020 annual meeting originally due to take place in May, but this was postponed due to the coronavirus (COVID-19) pandemic. Shareholders are understood to be divided on the move, which Chakrabati favours, not least because – as he pointed out in an interview with Reuters in February – the pandemic is likely to lead to the first Africa-wide recession in 25 years with a devastating effect on employment.

The last few years saw the bank’s return to Uzbekistan after it halted work there for a decade because of the poor human rights record of the late dictator Islam Karimov. After Karimov’s death in 2016, the reforms initiated by Karimov’s successor Shavkat Mirziyoyev persuaded the EBRD to return. Chakrabarti visited Uzbekistan in July 2018, when he praised the government’s efforts to liberalise the economy and advance political reforms.

Two years after Chakrabati took over at the EBRD, the development bank held its first top-level summit for the Western Balkans countries, and this has been followed by three more summits aimed at promoting regional co-operation and supporting countries from the region in their efforts to integrate with – and eventually join – the EU. The Western Balkans has become one of the top recipients of investment per capita in the EBRD’s area of operations.

There were tough decisions to be made regarding Russia, by far the region’s biggest economy and one of the bank’s shareholders, when it illegally annexed the Crimea from Ukraine in 2014. The bank froze new projects in Russia from 2014, despite bankers diplomatically making it clear they were against the idea, and its Russian portfolio has steadily shrunk since then.

Earlier this year there was speculation that a small new investment into Russian travel aggregator Travelata, the first fresh capital injected into a Russia company since 2014, could be the start of a wider return to Russia. However, a spokesperson for the bank said at the time that it did not signal a change of strategy.

Egypt was the top recipient of EBRD financing during 2019, followed by Ukraine, where the bank almost doubled its investments compared to the previous year. Turkey was the third-largest recipient of EBRD investment in 2019, receiving just over €1bn in financing. This was despite the EBRD backing away from its investment in the Istanbul Stock Exchange after an ex-Halkbank official who served a prison sentence in US for Iran sanctions-busting was installed as the bourse’s CEO.

Everything changed in early 2020 as the coronavirus pandemic engulfed the world. The EBRD has thrown itself into supporting countries in its regions of operations, as substantial contractions in GDP are forecast almost universally. On April 23, shareholders approved response and recovery measures under which the bank is ready to provide support worth €21bn in 2020 and 2021. A statement from the bank said it plans to “dedicate the entirety of its activities” to helping countries to combat the economic impact of the crisis.

“The crisis is now so all‐encompassing that, in practice, it is expected that all of the bank’s business over the next one to two years will contribute to the EBRD’s crisis response,” said Chakrabati at the time.

In his speech on June 30, he described the world as being in “the depths of the worst unforeseen crisis of my – relatively long – lifetime.”

As discussions of the post-COVID recovery are underway, Chakrabati pressed for the green economy to be put at the heart of the recovery. “[I]t would be a serious error to consider spending on greening the global economy as no more than an optional add-on to the real business of economic recovery. The truth is that green must be at the very centre, not on the periphery, of the recovery planning we do now,” he said.

Chakrabati, a former high-ranking British civil servant, was the first person to win two competitive elections to head the EBRD. After serving for two terms as the bank’s president, the maximum allowed under the current rules, he said he is leaving the bank “in good shape”.

The bank commented in a July 2 statement marking his departure that: “Sir Suma … led a very significant change management process within the EBRD during his eight years as president. Management quality has improved and the leadership cadre is today much more diverse, both in terms of gender and nationality. Such modernisation contributed to the EBRD achieving record investment and near-record profit levels in 2019, the last full year of Sir Suma’s leadership.”

There has been speculation in the British press that Chakrabati could be one of the potential successors to Sir Mark Sedwill, who announced he was stepping down as Cabinet Secretary after rumoured clashes with prime ministerial advisor Dominic Cummings.

However, the EBRD said on July 2 that after leaving the bank, Chakrabati would remain involved with international development and green issues through several pro bono positions. These will include chairing the board of trustees of international development think-tank ODI and becoming a global commissioner of the New Climate Economy Network. He also plans to advise governments and private and public sector organisations.

Plans to appoint his successor at the EBRD annual meeting in May were thwarted when it was postponed. Instead, EBRD first vice-president Jurgen Rigterink took over as acting president of the EBRD on July 3, and a permanent successor will be elected at the annual meeting that is now due to take place in October.