STOLYPIN: The weaponisation of tedium is Putin’s new strategy 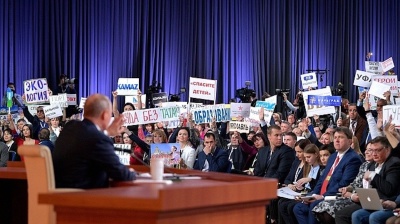 At the end of every year, Vladimir Putin stages a marathon press conference. Amidst the carefully-contrived zingers, the obsequious softball questions, and the barrage of tedious factoids, what usually emerges is a sense of the man’s current state of mind and his priorities for the future. With the 2018 presidential election looming, it is clear that his approach will be a little populism, a measure of national paranoia – and a huge admixture of outright boredom. And it is probably the right strategy.

This year’s lasted three hours and 40 minutes, a full hour short of 2008’s record, but in all fairness it felt longer. Much was taken up with questions on such riveting topics as the legality of fitting cows with GPS trackers (Putin thought it ought to be OK) and the price of fish (Putin was on the fishermens’ side). Even when given the chance to pitch his presidential election platform, Putin managed to be both evasive and general, offering a manifesto of “infrastructure, health, education, and technology”, before adding that “this is not the right format to go into detail”. Who, after all, is against infrastructure, health, education, and technology?

Asked about the continued absence of Alexei Navalny on the ballot, as ever Putin stepped into Harry Potter territory, treating the opposition leader as he-who-is-not-to-be-named and comparing him with Mikheil Saakashvili, the chief spoiler in Ukrainian politics.

However, what real passion Putin – who appeared detached, even bored for much of the event – could muster was about US policy and especially the exclusion of Russia from the forthcoming Winter Olympics, which he clearly considers an American plot. Indeed, he suggested whistle-blower Grigory Rodchenkov was “working under the control of American special services” and wondered artlessly “what are they doing with him? What substances are they giving him so he says things?”

Putin very rarely gives interviews, and they tend to be carefully managed. He is very unlikely to engage in any public debate for the elections, and even if he does it would probably only be with the Communists’ Gennady Zyuganov and the nationalist Vladimir Zhirinovsky, the senescent and the splenetic, respectively. For all their choreography and artificiality, his press conferences and annual ‘direct line’ phone-ins are about the closest things to a national conversation that takes place.

In that context, buried within the dullness are some useful indicators of the national mood. The focus of questions was not on foreign policy so much as concerns about daily life: the state of the regions and their budgets, roads and land taxes, as well as inflation and pensions. Putin tried to offer reassurance, as usual couched in barrages of statistics, but telling people life is getting better only works so far and for so long.

More to the point, despite Putin’s lacklustre answer as to his manifesto, the press conference pretty conclusively demonstrated the three central elements to his likely election strategy.

The first is an appeal to ‘Russia beleaguered’. Given that the official line is that Western sanctions are an irritating irrelevance, he could not blame Russians’ hardships on these. Instead, he returned to one of the leitmotifs of this presidential term, that the West, consumed by envy, spite, and a fundamental failure to understand the Russians and their heroic place in the world, is embarked on a no-holds-barred political and civilizational struggle against them. The Olympic ban was just one example of this. Expect to see much more more-in-sorrow-than-anger lambasting of Western ‘hypocrisy’ and ‘hostility’.

The second was that these are tough waters, requiring an experienced helmsman. Opposition figures such as Navalny, even opposition-lite Ksenia Sobchak, offer, he claims, only risk and demagogy and “noise in the streets”. Weeping crocodile tears, he bemoaned the absence of a “competitive opposition” which could “propose a real, not ephemeral, or clamorous agenda, but a real one – one that people would believe”. In short, better the devil Russians know.

But the third element was not buried in the boredom, it was the boredom. There is an interesting tension here. Candidates such as media personality Sobchak and business ombudsman Boris Titov have been crowbarred into the election to give it some semblance of excitement. However, like the kind of glitzy TV spectaculars Sobchak used to front, the gloss is there to conceal the lack of substance.

Putin and his political technologists want to get people to the polling stations, by hook, crook or fancy gimmick. But they do not want them thinking too much beforehand about what that means. Victory in Syria has been declared – so don’t worry that the boys may be fighting and dying for a foreign dictator. The economy is growing – so don’t worry that social services are continuing to deteriorate and real-term quality of life slipping. This time Putin will not be standing as a representative of the United Russia bloc – so don’t associate him with its crooks and thieves. And meanwhile, running the country is important, but technical, dull, complex. Something only fit for a veteran leader, someone who has been doing the job in effect for 17 years.

In short, the moral of the presser was that the world was too dangerous, the opposition too flaky, and the job too tedious and complex for any alternatives to Putin to be conceivable. So just turn to a different channel and think no more about it – until it’s election day.