STOLYPIN: Stagnation as strategy evident in Tillerson’s trip to Moscow 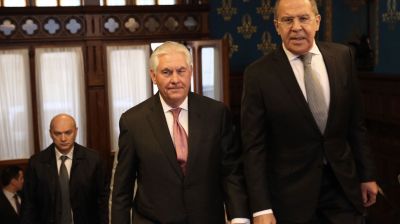 US Secretary of State Rex Tillerson with Russian Foreign Minister Sergei Lavrov in Moscow on April 12, 2017.
By Mark Galeotti of the Institute of International Relations Prague April 12, 2017

The odds for any kind of breakthrough from US Secretary of State Rex Tillerson’s visit to Russia were vanishingly low from the first. As it was, the political process proved as gridlocked at Moscow’s streets, as highway after highway was closed to accommodate VIP motorcades. This is not just a question of US-Russian relations, though: it also speaks to the Kremlin’s fundamental uncertainty as to what to do about a whole series of urgent concerns.

Whether it changed much on the ground, Washington’s cruise missile strike on Syria proved to the Kremlin that its worst nightmares about the Trump presidency were justified. A Russia which had always artfully played the unpredictability card is now facing an America which is more powerful, demonstrably willing to take risks and use force, and genuinely unpredictable.

After all, Russia is keenly aware of the strengths of the US, and in the past has relied upon its restraint and its unwillingness to act quickly or decisively. Some Russian military officers – who, interestingly enough, didn’t seriously question Assad’s involvement in the gas attack – used a very Russian metaphor to me when they compared the US to a sleeping bear. “Maybe the gas just disturbed the bear enough to swat a paw without really waking it up. But we really don’t want to wake it.”

The problem is that in the absence of any clear strategy in the Kremlin, the Russians are returning to the usual old playbook. They have denied Assad’s role, and made counter-accusations of provocations and “illegal acts”. Putin has castigated the West. In a sign of how quickly things change, he even implied a degree of nostalgia for the once-despised Obama years, saying that “the level of trust on a working level, especially on the military level, has not improved, but rather has deteriorated.”

Yet the strategic opportunities provided by Trump’s accession have been squandered through indecision, and the chance to step away from Assad and his toxic – in every sense – regime wasted.

This is not just a foreign policy problem, it is a symptom of a wider malaise in Moscow, and one encountered at every level and in every sector.

The soldiers are happy enough with their performance in Syria, but worry that neither there nor in the Donbas is there are real sense of an end-game. As pressure starts to come to bear on the defence budget – likely to fall by 5% through 2017 – then it becomes harder to pretend that Russia can build armed forces capable of doing everything, from imperialist power-projection, through local counter-insurgency, to territorial defence. Will they be able to create a genuinely modern force, or will the old need to maintain uneconomic defence industries and pacify various lobbies once again prove dominant? They do not seem to be getting any guidance from above, precisely because the Kremlin is unwilling to make the tough choices.

While narrowly-focused technocrats such as Central Bank of Russia governor Elvira Nabiullina continue to do urgent and essential work, there is a widespread understanding that the economy needs fundamental reform: diversification, a renewed struggle against ‘raiding’ and industrial-scale embezzlement and contract corruption, but there is no sense of how this can be done. The fate of former economic development minister Alexey Ulyukaev, trapped in a corruption case in November not just for challenging Rosneft boyar-in-chief Igor Sechin but more generally questioning the current stoligarchic – state oligarch – structures, has had a chilling effect on any insiders who might have their own bright ideas. Again, the Kremlin is ducking the difficult decisions and just hoping for the best.

Even the treatment of would-be presidential challenger Alexei Navalny, jailed for 15 days and then released this week, betrays a fundamental sense of indecision. It seems increasingly unlikely that he will be allowed to run and given the consequent bully pulpit for his views, but conversely there seems no sense of a strategy. In its absence, original grand hopes for a Putin coronation in the 2018 elections and a 70/70 – 70% turnout, 70% share of the vote – endorsement of his reign look likely to be scaled down. Instead, once again the Kremlin will turn to the old playbook, mobilising its administrative resources, squeezing out genuine opposition, and mounting a tired and threadbare imitation of a real election, one unlikely to arouse enthusiasm, yet one easier to manage.

Overall, so far Tillerson’s visit has been surprising only in its distinct lack of surprises. The Russian government has opted simply to hold its line. This should not be confused with toughness or strength, though. It is rather a Kremlin default in the absence of any more productive, creative or brave choice. Strategy has been replaced with stagnation, and the policy gridlock continues.

SAIDOV: Strengthening the Foundation of the Uzbek Capital Market Infrastructure

After sitting moribund for two and half decades, Uzbek president Shavkat Mirziyoyev has just launched a major reform to the Uzbek capital markets that could transform financing in the republic.

For financial market investors, Russia is currently in the same basket as Turkey and Ukraine, but only on a temporary basis.

TRENIN: Russia-Ukraine war alert – what’s behind it and what lies ahead?

Perhaps the most important thing for the Russian leadership in this episode was to prevent the need to actually go to war against Ukraine in the future. Going for overkill in terms of military manoeuvres now prevents actual war later.

In 1Q21, ruble weakness was caused not just by political tensions, but also by a disappointing trade balance and resumed preference for foreign assets by residents. ING has downgraded its mid-year ruble expectations to USD/RUB75.

SAIDOV: Strengthening the Foundation of the Uzbek Capital Market Infrastructure
22 minutes ago
COMMENT: Fresh US sanctions and OFZ primary market ban a global non-event, but sanctions possibly now entrenched quasi indefinitely
2 days ago
MITTELEUROPEAN INSIGHTS: Russian 'sanctions bubble' vs Ukrainian and Turkish fundamentals
3 days ago
TRENIN: Russia-Ukraine war alert – what’s behind it and what lies ahead?
4 days ago
ING: Russian ruble downgraded on weak balance of payments in 1Q21
5 days ago