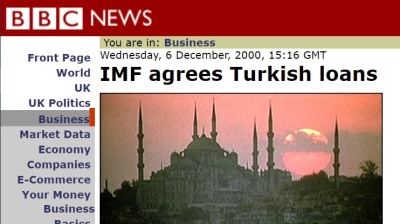 Flashback to two decades ago. Is Turkey getting a feeling of déjà vu?
By bne IntelIiNews October 28, 2020

As Turkey's markets on October 28 wound down on the eve of the Republic Day public holiday there was nothing restful about the news for officials trying to prevent a profound economic crisis from taking deep root.

Durmus Yilmaz, a former Turkish central bank governor, warned that the country is heading for a repeat of the 2001 economic crisis, when foreign companies bought up its firms on the cheap. While, adding to Ankara’s escalating woes, Politico carried a report telling how Brussels is mulling trade action against Turkey because President Recep Tayyip Erdogan is seen as having contravened the spirit of the free trade arrangements between his country and the European bloc by calling for a boycott of French products in his row with France’s President Emmanuel Macron over what he claims is French “oppression against Muslims in France”.

Yilmaz—an economist who was central bank chief from 2006 to 2011 and currently vice-chair of the nationalist, liberal-conservative Iyi opposition party—took aim at Turkish Finance Minister and Erdogan son-in-law Berat Albayrak for comments he made in a telecall with dozens of global company representatives on October 27 in which he predicted that a new wave of foreign capital would enter Turkey. The Turkish lira’s record slump against foreign currencies—it fell to another all-time low against the dollar on October 28, dropping to 8.3224 taking its depreciation in the year to date to near 30%—amounted to a self-fulfilling prophecy that threatened to turn Turkey into a paradise for bargain-hunters, he warned.

“With the exchange rate at these levels, everything is so cheap it’s become a steal,” Yilmaz wrote on Twitter. “But there’s more to come—let prices fall a bit more and just like in the 2001 crisis, Turkish companies will fall into foreign hands.”

Yilmaz is a fierce critic of the present central bank’s monetary policy, which has kept interest rates at below annual inflation.

Memories of the IMF

In May 2001, Turkey found itself with little choice but to sign an extension of a 1999 International Monetary Fund (IMF) loan deal worth $19bn. Economic mismanagement saw a frightening plunge in the value of the lira, stocks crashed, there was a surge in interest rates to as high as 3,000% and inflation and state-run banks were enveloped by a balance sheet crisis. Massive unemployment and shortages of medicines emerged.

With the Erdogan administration using cheap money in an attempt to dig Turkey out of the hole it fell in during the August 2018 lira crisis—a crisis that itself was caused by the unwise ladling of easy credit—and essentially stripping the central bank of independence in monetary policy, masses of foreign capital has this year lost confidence in the Turkish economy and has disappeared through the exit. What’s more, Erdogan, who prides himself on his stewardship of the economy in the wake of the 2001 crisis, has pledged that on his watch Turkey will never go back to the IMF for a bailout.

In the European Union, some European politicians riled by Erdogan are by now calling for a full-blown suspension of the EU's customs union with Turkey, but officials and diplomats are briefing media that a suspension of that free trade arrangement remains unlikely, with a more targeted approach favoured.

Brussels is reportedly looking into anti-dumping investigations as a way to turn the trade screws on Ankara. Obvious targets lie in steel, where EU producers have already filed complaints, but the European Commission could also launch investigations of its own choosing.

“EU agreements with Turkey foresee free trade of goods. The bilateral obligations that Turkey has committed to under these agreements [as expressed in the Association Agreement, the Customs Union and the agricultural and coal and steel FTAs] should be fully respected,” a Commission spokesperson was quoted as saying by Politico.

Some European parliamentarians were more outspoken. "Turkey weaponised migration and now it weaponised trade. What else does it have to do for us to take action? We should suspend the customs union," said Anna-Michelle Asimakopoulou, the Greek vice chair of the European Parliament's trade committee for the centre-right European People’s Party (EPP). "We are not going to trade with someone who blackmails us and boycotts us," she added.

The beleaguered lira, meanwhile, is forcing up Turkish inflation. Turkey’s central bank on October 28 raised its 2020 inflation forecast by more than 3 percentage points to 12.1%, saying higher import costs due to the weak lira were the main factor in its upward adjustment. Scepticism as to Turkey’s official inflation figures has been building lately, with some observers convinced its monthly inflation rate, and possibly its annual inflation rate too, are running two or three times as high as the national statistical institute portrays.

Central bank governor Murat Uysal defended the regulator’s decision to leave its policy rate steady at 10.25% last week and to raise its late liquidity window rate, pointing to global uncertainty caused by the coronavirus (COVID-19) pandemic that meant flexibility in the monetary policy structure was required.

Uysal said the central bank had no target value for the lira, adding in a briefing on the authority’s quarterly inflation report: “We see it converging with macro-fundamentals in the medium term.”