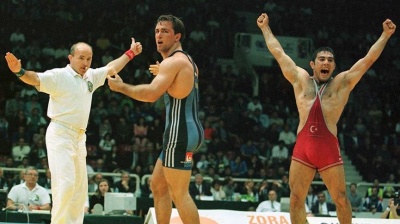 Yerlikaya, right, seen during his glory days in his former day job.
By bne IntelIiNews June 16, 2020

A social media storm blew up in Turkey after the country’s fourth-largest lender, VakifBank, appointed to its board a former Olympic wrestling star who serves as an adviser to President Recep Tayyip Erdogan and as a deputy minister for youth and sports.

Hamza Yerlikaya, 44, a Greco-Roman wrestler of the 1990s, was made an independent board member on June 12, the bank said in a stock exchange filing.

One social media user tweeted photos of Turkish oil wrestlers with captions reading “Vakifbank board members”, while another quipped that Yerlikaya would be asked to “pin down” VakifBank borrowers who failed to repay debts.

“It’s not right for banks to designate those with no banking experience to their management,” Faik Oztrak, spokesman of the opposition Republican People’s Party (CHP), told Bloomberg. “The ruling party has completely brushed aside merit-based assignments.”

Yerlikaya won his first world title in 1993, at the age of 17. He finished his career with seven world and Olympic medals and eight European titles. In 2007, he was elected a lawmaker for Erdogan’s ruling Justice & Development Party (AKP). In 2015, he was appointed as a senior adviser to the president.

Vakifbank increased its capital by about Turkish lira (TRY) 1.4bn ($207mn) in May as Turkey’s sovereign wealth fund, run Turkey Wealth Fund (TVF), became a major stakeholder. It posted a Q1 profit of TRY1.72bn, up 164% from the same period a year earlier.

Iran's ambassador to Seoul was summoned to the South Korean Foreign Ministry on July 23 as an official protest was lodged over reports that Tehran is mulling legal action against Seoul over the ... more