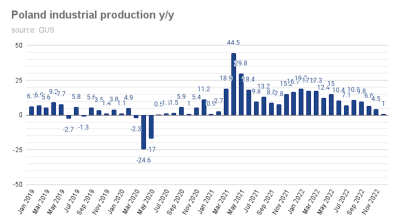 The December reading arrived 0.7pp below the consensus line, weakening the outlook for economic growth in the fourth quarter to approximately 1.5% y/y. The year 2023 will see further deceleration to about 1% in what analysts say is a “soft landing” of the economy in the wake of the crises set off by Russia’s war in Ukraine.

Analysts say that output in construction and related segments and in segments focused on exports drove the expansion in December.

“Weakening demand from the domestic economy and abroad affects the sector’s activity, which, however, is sustained by sub-sectors benefitting from the improvement of the situation in international supply chains,” Bank Millennium wrote in a comment.

Seasonally adjusted, output growth picked up to 5.6% y/y in December following a gain of 4.4% y/y the preceding month.

Broken by the main segments and in unadjusted terms, production grew 3.4% y/y in December in manufacturing, easing from a revised expansion of 6.4% y/y in November.

Output in the utility sector fell 16.3% y/y in December after a revised fall of 12.6% y/y the preceding month.

In water supply and waste management, production grew 1.8% y/y in December, which followed a revised gain of 0.6% y/y in November.

Production contracted 6.9% y/y in December in mining and quarrying, slowing down from an increase of 0.6% y/y the preceding month, GUS data also showed.

Overall, production rose in 17 out of 34 industrial segments in December in y/y terms, down from 19 in September. The fastest sectorial expansion took place in the production of motor vehicles, trailers and semi-trailers as well as machinery and equipment. Output contracted the most in metal and utility segments.

Industrial production data do not change much in the outlook for Poland’s monetary policy. The National Bank of Poland’s reference interest rate has remained at 6.75% since September. Resuming interest rate increases appears out of the question currently.