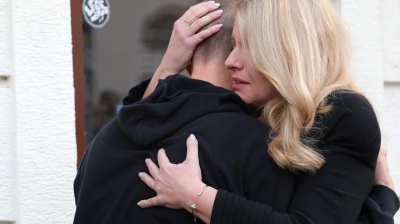 Protesters held rallies in Bratislava on Friday and Sunday over the murder of two men and the injuring of a woman in front of a bar popular with the LGBTQ community on Wednesday, October 12. The march on Friday gathered a crowd of an estimated 15,000 and was followed by a rally “We remain in the streets/Antifascist march through the city” on Sunday.

“If you are shocked by what happened then you have lived your lives with your eyes shut”, a close friend of one of the murdered youths was quoted as saying on Sunday by Slovak media, adding that his friend was assaulted on a train for wearing a rainbow ribbon just a day after the murders.

On Friday several artists and public figures condemned the attack on the LGBTQ community and called on politicians to implement measures preventing similar attacks in the future and send a clear signal that LGBTQ community is an equal part of Slovak society.

The rallies followed strong condemnation of the crime by Slovak premier Eduard Heger, who warned an unacceptable line has been crossed, threatening fundamental freedoms and the Slovak constitution. Heger said that “we have to stop this in its origins” adding that hatred originates in "our words”.

Slovak President Zuzana Caputova came to the scene of the shooting the day after, comforting the owner of the bar and gathered friends, and calling on politicians to moderate their statements on social media and reiterating that “words are a weapon”.

Caputova also addressed the crowd on Friday, saying “I am sorry. I regret our society could not protect your close ones. I am sorry that some of you cannot feel safe in Slovakia”. The Presidential Palace in Bratislava put up a rainbow flag and a number of cabinet members marched together with the crowd through the city centre.

Several other cities across Slovakia saw similar rallies, and Comenius University in Bratislava issued a statement mourning the tragic loss of life of one of their students “for incomprehensibly absurd reasons”.

Slovak historian Ivan Kamenec, who addressed the crowd on Sunday, called for an examination of a social environment that breeds ideas leading to cold-blooded murder. “Today’s admirers of totalitarian fascist systems are more or less following their political programme in a sophisticated way and are falsifying history”, said Kamenec.

The suspected teenage shooter was found dead the next day in what was an apparent suicide, after chatting about the murder on his social media profile, calling it “fun”. The police are investigating the shooting as a hate crime and did not rule out investigating it as an act of terrorism. Lubomir Dako of National Criminal Agency told media that the killer had made deliberate preparations to carry out a crime fuelled by hatred.

Many opposition politicians downplayed the crime. Legislator and former finance minister Ladislav Kamenicky of the populist Smer-SD of former premier Robert Fico said he thought the hate crime was being politicised. “Currently we have other issues to solve”,  he said, pointing to soaring energy and food prices during a Saturday Slovak TV debate that also discussed a European Commission survey showing that 59% of Slovaks don’t want same sex couples to marry or adopt children.  In Slovakia, same-sex marriage is opposed by the powerful Catholic church, most rightwing parties, and the populist left.