Siemens to wind down Russian operations 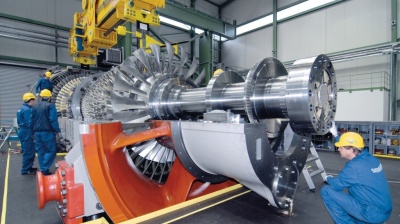 A Siemens H-class gas turbine / Siemens
By bne IntelliNews May 12, 2022

German engineering giant Siemens has announced that it “will exit the Russian market as a result of the Ukraine war”, and it is starting the proceedings to wind down its industrial operations and all industrial business activities.

The company said that that “the comprehensive international sanctions, as well as current and potential counter-measures, impact the company’s business activities in Russia, particularly rail service and maintenance”.

As reported by bne IntelliNews, the possible departure of Siemens is one of the most closely watched foreign industrial major pullouts out of Russia due its major role in the supplies of gas turbines. Siemens did not specifically comment on the sales of turbines in the press release.

Previously Siemens survived a sanction-busting embarrassment when its gas turbines were used to power utility assets in the annexed Crimea peninsula, and it even solidified its presence in Russia by playing along with Kremlin’s localisation demands.

Should Siemens indeed pull out of Russia for good, it is unclear whether alternatives to Siemens turbines will be provided by domestic players.

Russian state utility major InterRAO planned to invest $0.8bn in the development of gas generation turbines, with a goal to sell over 20 turbines by 2030. However, InterRAO operates the project through its Russian Gas Turbines (RGT) joint venture with General Electric, which is likely to be scrapped due to sanctions.

Another contender on the gas turbine market is REP Holding, a subsidiary of Russian Gazprombank, but it also operates as a joint venture with a foreign company, the Italian Ansaldo Energy.

Siemens also holds 65% in a joint venture with Power Machines, the engineering company of sanctioned steel tycoon Alexei Mordashev. Mordashev also tried to compete with Siemens for the production of gas turbines and previously rallied state support for his efforts to produce turbines domestically. His Power Machines has repeatedly urged authorities to shift lucrative state contracts for gas turbines away from foreign companies like Siemens and it has aimed for gas turbine contracts together with ODK Saturn, a subsidiary of Russian state technology agency Rostec.

Previously in March Siemens already notified the Russian Railways of the suspension of a contract on purchases of new Sapsan electric trains. The €1.1bn contract was signed in 2019 and covered purchases and maintenance of 13 new Sapsans, with the deliveries scheduled for 2022.

Russia’s CBR reserves down $43.7bn since the start of the war
Azov commanders have remained behind in the Mariupol steelworks to continue the fight
Anthems of victory: How Ukraine is winning the online culture war

Kyrgyzstan: Eccentric health minister fights for his job amid claims of corruption and bullying
1 hour ago
Azov commanders have remained behind in the Mariupol steelworks to continue the fight
2 hours ago
Russia hopes Chinese carmakers will help revive Moskvitch brand
3 hours ago
Russia may leave the WTO and WHO. In practice, it never really joined
3 hours ago
UN special rapporteur issues damning indictment on human cost of sanctions in Iran
8 hours ago