Serbian troops on alert amid tensions in Kosovo 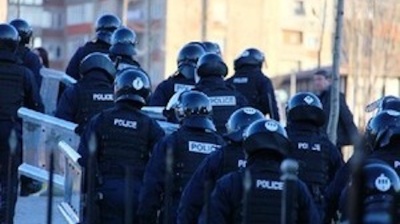 By Valentina Dimitrievska in Skopje May 28, 2019

Serbian troops were put on high alert on May 28 after Kosovan police arrested several ethnic Serbs in northern Kosovo including police officers.

Early in the morning the Kosovan police entered areas in the northern part of the country populated mainly with ethnic Serbs as part of what the police said was an anti-smuggling operation. However, the Serbian authorities said the move was aimed to intimidate Serbs and cause panic in northern Kosovo.

“The police arrested some police officers and citizens and seized various things including weapon,” the police said, stressing that the arrested people are from various ethnicities: Kosovan Albanians, Serbs and Bosniaks.

According to media information, three police officers were injured and 10 people were arrested.

The Kosovan police said that operation was launched following suspicions that some police officers and citizens were involved in criminal activities, such as participation in and organisation of criminal groups, smuggling, bribery and money laundering.

The operation was conducted in North Mitrovica, South Mitrovica, Zvecan, Zubin Potok, Leposaviq, Skenderaj and Drenas in cooperation with the police inspectorate and came after several months of investigation.

A police officer was injured when suspects resisted arrest in North Mitrovica, but his injuries are not life threatening, the police said.

The head of the Serbian office for Kosovo, Marko Gjuric, said that "it is obvious that extremists and those who gave them consent for this action, do not want ethnic Serbs to live in Kosovo."

However, according to the police in Kosovo, the operation was part of the "fight against crime and is in the interest of all citizens and the country."

Kosovan Prime Minister Ramush Haradinaj confirmed on Facebook that there was a police operation in the north of the country, but said that "it was about law enforcement and nothing else."

“Organised crime and smuggling are a direct threat to our common progress, and should not be based on ethnicity. The Government of Serbia should not aim to undermine our efforts to combat organised crime,” Haradinaj said.

Kosovan President Hashim Thaci in the meantime called for calm following the arrests, which prompted Serbian troops stationed near the border with Kosovo to be put in high alert.

Kosovo declared independence from Serbia in 2008, but is still not recognised as a separate country by Belgrade.

Late on May 27, Serbian President Aleksandar Vucic said in parliament that Serbian people should accept reality and make a compromise to normalise relations with Kosovo.

Vucic underlined “we need to recognise that we were defeated in 1999,” when Nato bombed Serbia to end the Kosovo conflict.

“One option is – normalisation of the relationship between Belgrade and Pristina, and the other is to preserve the frozen conflict,” Vucic said.

Kosovo’s outgoing Prime Minister Albin Kurti announced on May 11 that he will stay in self-isolation after coming into contact with a person suspected of having coronavirus (COVID-19). In a ... more

Citizens from several cities in Kosovo joined a symbolic protest from their homes on the evening of March 19. Rather than putting lives at risk by gathering in person to protest, citizens went to ... more