Serbia to become vaccine production hub for the Western Balkans 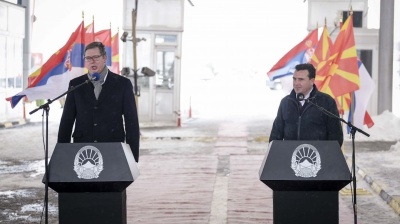 Serbia will be able to produce 20mn doses of the Russian Sputnik V vaccine, President Aleksandar Vucic stated on TV Pink on February 16.

“Our estimate is that we are able to produce 20mn doses. We need five to six million, and the rest can be sold in the region,” Vucic said.

Vucic stated that Serbia has signed agreements on more than 10mn doses of the vaccine and that it has so far received around 2mn doses. The country’s population is just under 7mn.

The president added that 41,000 doses of the Pfizer vaccine were on their way, as well as of the AstraZeneca vaccine, and then 50,000 of the second dose of the Russian vaccine Sputnik V. He said, however, that Serbia was yet to get vaccines from the COVAX programme.

There are now plans to set up production of the Russian  Sputnik V vaccine in Serbia. A delegation of Russian experts that visited Serbia in mid-February estimated that there are technological conditions for the first phase of the production of the vaccine. Serbia would thereby become the first country in Europe to produce the vaccine.

Minister without portfolio in charge of innovation and technological development Nenad Popovi said on February 15 that production will take place in two phases. The first phase could start in two to three months, and the second within seven to nine months, a government statement said.

Even before the launch of production, Serbia’s success in securing vaccines from multiple sources — in line with its four pillar foreign policy of good relations with the EU, the US, Russia and China — has made it one of the most advanced European nations in terms of the share of the population already vaccinated.

So far Serbia has vaccinated 14% of its population, putting it second after the UK in Europe, and far ahead of any EU country.

Meanwhile, its neighbours in the Western Balkans have struggled to secure any vaccines at all. Albania, Bosnia & Herzegovina and North Macedonia have started vaccinating their populations but have only received small numbers of doses.

He said that a part of the population of Bosnia & Herzegovina’s Serb entity Republika Srpska would be able to get vaccinated in Serbia and that it remained to be seen whether Serbia could provide them with a quantity of vaccines.

Serbia’s announcement that it will also vaccinate ethnic Serbs in Kosovo has angered the government in Pristina.

Meanwhile, Albanian Prime Minister Edi Rama has lashed out at the EU for failing to give sufficient help to the candidate and potential candidate countries of the Western Balkans.

There is a high level of vaccine scepticism in Serbia and other Western Balkans countries and it seems that after the initial euphoria, the desire for vaccination in Serbia is declining.

The response of citizens to vaccination in Serbia is disappointing, the Vojvodina Research and Analytical Centre (VOICE) announced, N1 reported.

Epidemiologist Zoran Radovanovic said that the response of citizens to vaccination against the coronavirus was “disappointing” and assessed that the cause was “unprecedented media manipulation and sensationalism”.

When asked why the take-up of vaccines among health workers is low, Radovanovic said that they, as well as other citizens, were influenced by those manipulations.

The president of Serbia stated on February 14 that health workers who accept the vaccine will receive an additional one-time bonus of RSD10,000 (€85).

There are also fears of a new rise in coronavirus cases, and an increase in hospitalisations.

Around 1,000 partygoers were caught at a Belgrade nightclub flouting anti-virus restrictions in Serbia, which has banned gatherings of more than five people, the interior ministry said February 14.

Three suspected organisers were held for 48 hours, the ministry said in a statement. A report on RTS television said the three faced a fine as well as possible jail terms of up to three years.

Polish proposed ban on Russian rubber may give the European tyre industry a flat
4 hours ago
Prague to have a new municipal government after record-long negotiations
9 hours ago
Party congresses of Hungarian opposition demonstrate deep divisions
9 hours ago
At least 500 dead after huge earthquake hits Turkey, Syria in early hours
9 hours ago
Turkish minister tells US ambassador ‘Take your dirty hands off Turkey’ as sanctions sparks fly
15 hours ago