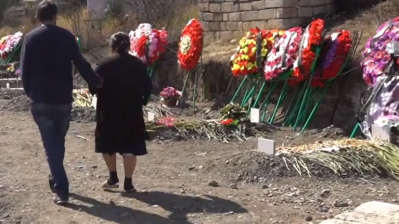 Amid the fighting, mourners on both sides hold funerals for the hundreds dead including dozens of civilians.
By bne IntelIiNews October 17, 2020

Armenia and Azerbaijan on October 18 announced a second attempt to establish a humanitarian ceasefire in their conflict over Nagorno-Karabakh, starting from midnight local time (8pm GMT).

The first truce, brokered by Russia to take effect from a week ago, entirely broke down, with both sides accusing each other of mounting attacks within minutes of the ceasefire commencing. This second ceasefire was agreed not long after Azerbaijan accused Armenia of striking its second-largest city, Ganja, with a Soviet-made Scud ballistic missile that killed at least 13 civilians, including small children, and wounded 50 others when it destroyed or damaged about 20 residential buildings overnight. Emergency workers spent hours searching in the rubble for victims and survivors.

In a televised address to the nation, Azerbaijan’s president, Ilham Aliyev, denounced the missile strike as a war crime. He warned the leadership of Armenia that it would face consequences for the attack. “Azerbaijan will give its response and it will do so exclusively on the battlefield,” Aliyev said.

Aliyev claimed that Azerbaijani forces have taken the town of Fizuli and seven villages around it, gaining a “strategic edge”. Fizuli is one of the seven Azerbaijani regions outside Nagorno-Karabakh seized by the Armenian forces during the war in the early 1990s.

The Armenian defence ministry denied launching the strike on Ganja, but the separatist authorities in Nagorno-Karabakh, a mountainous territory, issued a statement listing alleged “legitimate” military facilities in Ganja, although they did not claim responsibility for the attack. They also claimed to have encircled some Azerbaijani troops but said they would let them out through a “humanitarian corridor” as part of the ceasefire.

The new ceasefire was announced by the Armenian and Azerbaijani foreign ministers following phone calls between Russian foreign minister Sergey Lavrov and his counterparts. Lavrov strongly urged the countries to abide by the Moscow deal.

French President Emmanuel Macron welcomed the agreement and urged both sides to strictly respect it. “This ceasefire must be unconditional and strictly observed by both parties,” the president’s office said in a statement. “France will be very attentive to this and will remain committed so that hostilities cease permanently and that credible discussions can quickly begin.”

Nagorno-Karabakh is internationally recognised as lying within Azerbaijan but it has been under the control of ethnic Armenians backed by Armenia since the Nagorno-Karabakh War, which took the lives of around 30,000 people, ended in 1994. The latest fighting for control of Nagorno-Karabakh, which flared up on September 27, is by far the worst seen since that six-year war was brought to an end but became a ‘frozen conflict’. It has involved heavy artillery, rockets and drones.

Azerbaijani authorities said on October 18 that 60 civilians have been killed and 270 have been wounded since the hostilities started, but they have not revealed military losses.

Ethnic Armenian separatist authorities said over 600 Nagorno-Karabakh soldiers and over 30 civilians have been killed in three weeks of hostilities, with the breakaway territory’s main city Stepanakert coming under heavy shelling for days on end. Tens of thousands of people that live in the enclave have fled their homes.

The OECD Minsk Group of international mediators co-chaired by Russia, France and the US has failed to make any real progress in solving the Nagorno-Karabakh question in nearly three decades.  Azerbaijan has demanded that its ally Turkey—which denies claims it is backing Azerbaijan in the conflict with military advisers on the ground, deployed Syrian militia mercenaries, armed drones and F-16 fighter jets—be given a role in any substantial peace talks. Russia has said there are no plans to change the talks format.

On October 17, US Secretary of State Mike Pompeo said Turkey had worsened the conflict. Speaking to broadcaster WSB Atlanta, he called for a diplomatic resolution, rather than “third-party countries coming in to lend their firepower to what is already a powder keg of a situation”.

“We’re hopeful that the Armenians will be able to defend against what the Azerbaijanis are doing, and that they will all… get the ceasefire right, and then sit down at the table and try and sort through this,” Pompeo added.

France’s Foreign Minister Jean-Yves Le Drian told an October 17 news conference alongside his German and Polish counterparts: “There will not be a military victory on this issue so the ceasefire must be implemented. What we can see today is the only country which isn’t calling for respect of the ceasefire is Turkey and that’s damaging.”

Also on October 17, Baku accused Yerevan of a missile attack on Ordubad in Nakhchivan autonomous province, an exclave which belongs to Azerbaijan but is surrounded by Armenia and Iran. Armenia denied such an attack.

The day also saw Russia announce naval exercises in the central waters of the Caspian Sea, to the north of the Azerbaijani capital of Baku. The Russian Defence Ministry said in a statement that "the activities ... do not pose any threat and do not impose restrictions on the economic activities of the Caspian littoral states."

On October 16, Iran's Foreign Ministry has issued another warning to Armenia and Azerbaijan after stray fire from the conflict reportedly wounded one person on the Iranian side of the border. "If there is any repetition of such fire, the Islamic Republic of Iran will not remain indifferent," Foreign Ministry spokesman Said Khatibzadeh tweeted.

Armenia accused Azerbaijan of amassing troops along the frontier with Iran, and using the border line as cover. Azerbaijan denied it.