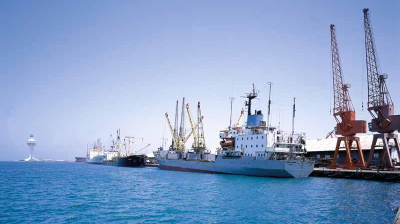 The Happiness I was rescued off the Saudi port city of Jeddah.
By bne IntelliNews May 2, 2019

Saudi Arabia said on May 2 that its coast guard had rescued a distressed Iranian oil tanker off the Red Sea port of Jeddah after receiving an emergency call reporting “engine failure and the loss of control”.

The Happiness I was spotted on May 1 by TankerTrackers.com, making a hard turn to the southeast on the Red Sea and apparently leaking oil.

Iranian officials said an incident occurred on April 30 when the Happiness I was on its way to the Suez Canal. Water had leaked into the tanker’s engine room, according to Iran’s official IRNA news agency. State-run National Iranian Tanker Co. said there had been no leakage of the oil cargo, according to the Iranian Oil Ministry's news agency SHANA. Saudi state media reported that all 26 crew members, including 24 Iranians and two Bangladeshis, were safe.

The incident attracted more media attention than would normally have been expected as it came on the eve of the US launching its attempt to drive Iranian oil exports to zero by denying sanctions waivers to all countries that would like to remain in the market for crude shipments from Iran. If anywhere near successful, the US move would severely damage Iran’s economy. The IMF last week predicted that because of the US sanctions regime, it is expected to contract 6% this year—but that forecast was given before the Trump administration abruptly announced that there would be no more waivers.

Biggest buyer of Iranian oil China, second biggest India and Iran’s neighbour Turkey have most strongly made their displeasure known when it comes to the US attempt at forcing them to stop taking consignments of oil from Iran.

“It does not seem possible for us to diversify the sources of the oil we import in a short time,” Reuters reported him as telling a news conference, adding that Washington should review its waivers decision.

“We have to renew the technology of our refineries when we buy oil from third countries. That would mean the refineries remaining shut for some time. This, of course, has a cost.”

India said on May 2 it was ready to deal with the impact of US sanctions against Iran and would get extra supplies from other oil producers, but China was yet to elaborate on its latest stance. Last month, Beijing said it opposed “long-armed jurisdictions implemented by the United States” and would continue “rational and legal” cooperation with Iran. Its final position on the matter might end up linked to the outcome of its trade talks with Washington aimed at avoiding an all-out trade war.

Also on May 2, the Nikkei Asian Review reported that Asian countries had been rushing ahead with purchases of Iranian oil before the US start-of-May deadline bringing in the no-exemptions policy fell.

Four Asian countries imported a combined 1.57mn barrels of Iranian crude per day in March, it cited Reuters as reporting on April 30. That was up 36% from the previous month. Shipments to Japan, China, South Korea and India soared to a level last seen in July. In contrast, their volume for the entire first quarter dropped 31% q/q.

Iran, which the US is trying to drive to the table to secure concessions on its Middle East policy, remains defiant, saying the US move against its oil will fail. "There are six methods of exporting petroleum that the US is not aware of," Iranian President Hassan Rouhani said on April 30.