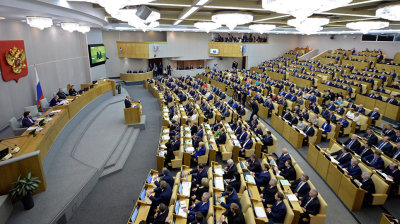 Putin called for restraint as the Duma proposes more sanctions against Georgia
By bne IntelliNews July 10, 2019

Russian President Vladimir Putin said on July 9 that Moscow would refrain from further sanctions against Georgia, despite a recent escalation of tensions between Russia and its small southern neighbour.

Putin made the comment in an interview with state-owned TV channel Russia-24 shortly after the Russian State Duma adopted a resolution on July 9 recommending that the government to discuss additional economic sanctions on Georgia and send a proposal to Putin. United Russia, the Communist Party, the Liberal-Democratic Party and Fair Russia all supported the resolution.

“For the sake of restoring full-fledged relations, I would not do anything to complicate our relations,” Putin said, according to a parliament statement.

The chairman of the State Duma Viacheslav Volodin responded, saying that Putin had given "them [the Georgians] a chance to come to their senses.”

“The position of the State Duma remains unchanged, it is necessary to consider the issue related to those forces developing Russophobia, that are against our country and trying to seize power in Georgia, and in this regard, we proposed specific measures that we could take: a ban on remittances, ban on mineral water and wine import,” Volodin told to parliamentary journalists.

“They should listen to our President Vladimir V. Putin. He gives them a chance again. Because we, representatives of the people of Russia, do not give them such a chance.”

Mass protests started in Georgia on June 20, when word spread that a Russian lawmaker was giving a speech from the speaker’s chair inside the legislature.

Thousands of protesters attempted to storm the Georgian parliament, but riot police stopped protesters from entering the building, using tear gas and rubber bullets. Hundreds of people were arrested and several have since been charged with an attempted coup.

Moscow responded with a ban on direct flights from Russia to Georgia that came into effect on July 8. Putin said on announcing the temporary ban that it was “to protect Russian citizens from violence or other illegal actions.” This disrupted the holiday plans of hundreds of Russians, while airlines from nearby states such as Armenia and Turkey have started putting on transit flights linking cities in Russia and Georgia indirectly.

Georgia was also among seven members of the Parliamentary Assembly of the Council of Europe (PACE) from Central and Eastern Europe that walked out of a session to “consult with the government” following the decision to reinstate Russia’s delegation. Volodin referred to this after the Duma vote, calling the move a “provocation” against the Russian delegation to PACE.

Russia had previously been suspended from PACE following the annexation of Crimea in 2014. Georgia, like Ukraine, has lost territory to Russia, which backed the separatist ambitions of two Georgian regions, Abkhazia and South Ossetia, and recognised the two breakaway republics after the five-day war with Georgia in summer 2008.

The recent spike in tensions between the two adversaries culminated when the host of Georgia’s Rustavi 2 opposition TV channel Giogri Gabunia delivered an expletive-laden diatribe against Russia and Putin personally, using some of the strongest swearwords in the language.

However, while this caused outrage in Russia, top Georgian officials also criticised the outburst: President Salome Zurabishvili condemned the use of “hate speech” that can only inflame tensions, and called for restraint. The foreign ministry took up the same theme. This appears to have started to ease tensions between the two sides, and may have encouraged Putin to ease off from fresh sanctions.