Retail investment into stocks has exploded in Russia as punters look for investments that have a better return than banks. Like elsewhere, many Russians have turned to social media to help them pick stocks to buy.
By Ben Aris in Berlin September 26, 2021

Russia’s retailed equity boom is gathering momentum and it is, like elsewhere, increasingly being driven by social media, according to a survey carried out by VTB Capital (VTBC) called “To the moon: Scoring social stock sentiment,” released on September 22.

After six years of almost continuous rate cuts by the Central Bank of Russia (CBR), retail investors have swapped out of the traditional high interest bank deposits and swarmed into equities in the search for an investment that has a better return.

The CBR has long complained about the low level of financial literary of the population, but thanks to the deep penetration of the internet – there are more people online in Russia than in all of Germany, Europe’s most populous country – and the sophisticated fintech apps that leading Russian banks are developing, that ignorance is disappearing.

The coronacrisis has only accelerated the process as Russians forced to stay at home have spent more time playing with their phones and computers when looking for somewhere to park their savings and protect them from the ravages of high inflation and the instability of the ruble.

As recently featured by bne IntelliNews, the St Petersburg-based SPB Exchange has been the big winner from the move into stocks by ordinary Russians. Retail investors have used its platform to buy stocks listed oversees, but Moscow Exchange (MOEX) has also seen the number of individual accounts climbing into the millions in recent years, and started to offer access to foreign-listed stocks last summer as well.

“Russian retail stock market investors have become a mature and material investor base whose investment patterns and preferences have considerable influence on market outcomes,” Alexander Isakov, chief economist at VTBC said in a note.

“We attempt to gain insight into the sentiment of the collective retail investor base at a granular level by studying unstructured text data from Russia's most active stock market­-focused social media, and applying modern machine-learning natural language processing tools,” he added.

Retail investors now account for an estimated 40% of the turnover on the Russian stock market and are increasingly affecting its performance. For example, in September international investors sold down some of this year’s gains, but Russian retail investors were still buying aggressively, keeping the market buoyant, according to BCS GM. International investors selling should have reduced the exposure to Russia, but over this year it has increased and they are currently overweight in Russian stocks, mainly because they have been buying into the slew of IPOs in the last 12 months. Retail investors, on the other hand, have been loading up on Russian blue chips, with the bank sector stocks being by far the favoured investment.

Below we reproduce the set of questions and answers from the VTBC survey that were released in a report on the impact of social media has on Russian retail investment decisions:

Q: How large is the retail investor base in Russia? A: It is large and booming: The CBR reports total retail holdings at RUB6.0 trillion ($82.5bn) as of 1Q21 (up from RUB2.6 trillion in 1Q19); MOEX reports some 14mn unique retail clients, while MOEX officials report that more than 15% of the recent IPO books have been filled with retail orders. 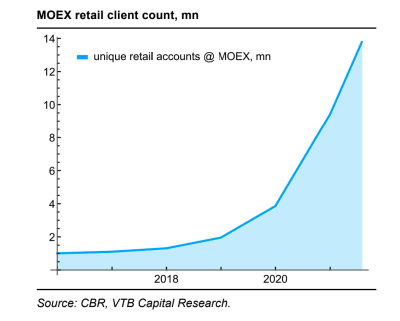 Q: You want capture retail sentiment – but in what sense?

A: Yes, we attempt to capture social sentiment toward individual stocks.

More practically, we harvest publicly available text data at scale, identify discussions about publicly traded companies, and map these onto a five-point scale ranging from 'strong sell' equivalent to 'strong buy' equivalent messages, and everything in between.

More particularly, we track text updates posted by financial market-­focused groups with meaningful audiences (i.e. 1k+) in one of the most popular social media platforms in Russia, Telegram.

We then fit a set of text classification ML ­models to a manually scored seed message sample, with our models ranging in complexity from standard (i.e. regularised logit) to state-­of-the-­art (i.e. a classification neural net head on top of the deep learning Russian language model SBERT). The resulting sentiment score is an ensemble, i.e. a consensus, of our models. 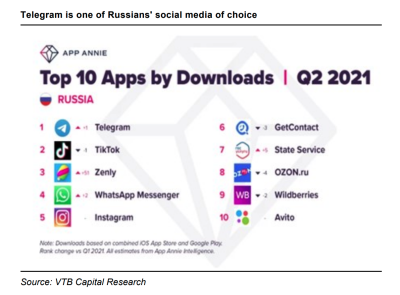 Q: What is the scale of the exercise? Is it representative?

A: The total audience count covered is some 1.5mn, which is approximately 11% of the unique and 75% of the active retail investor accounts on the MOEX.

The audience of the channels (channels are essentially author­-centred communities where messages are translated onto the audience) definitely has a substantial intersection and the unique audience is substantially smaller. Still, we believe that the universe of opinion is adequately covered.

We deliberately concentrate on a segment of social media that is focused on stock picking and are not general 'news aggregators' in order to reduce signal-to-noise ratios.

Nevertheless, even in the stock picking community, 'statement of fact without price cross­read' messages dominate the flow. 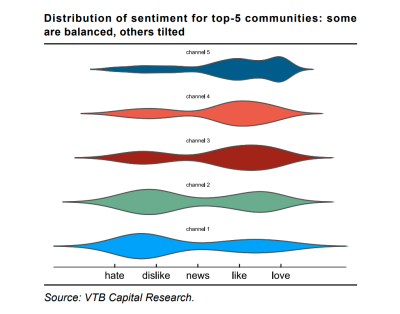 Q: What is the key takeaway from an equity investor perspective?

A:This depends on the investor – and the covered sector – as stock prices, on our numbers, have varying degrees of sensitivity to public sentiment.

In order to estimate this sensitivity, we run a Granger causality test for 1­5 lags of social sentiment influencing stock price changes and calculate the corresponding p­values. The null hypothesis here is that there is no causality, so the lower a stock’s p­value, the stronger the evidence that the influence of public sentiment on that stock's prices should not be excluded.

The bar chart below left shows some of the stocks that have the lowest mean p­values in our sample covering January 2019 – ­August 2021. For their holders (both actual and potential), tracking social sentiment might make sense and improve asset allocation.

Q: What is current social sentiment by stock?

A: In the chart below we exclude neutral sentiment (i.e. messages concerning statement of fact) and only show those with strong current sentiment. We also censor tickers with the most negative social sentiment. 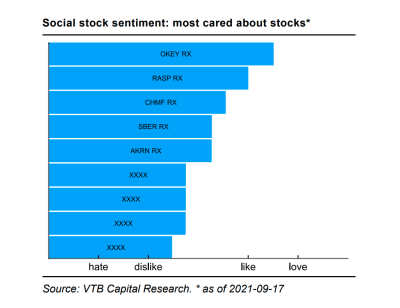 Q: Did you test how a hypothetical portfolio allocation strategy based on social sentiment would perform?

A: Yes. The charts below show a stock sentiment­-based single stock strategy performance relative to 'buy and hold' for January 2019­ - August 2021 based on daily US$-­nominated stock returns.

For illustrative purposes we estimated a strategy in which short stocks are 'disliked' or 'hated' and longs stocks 'liked' and 'loved'. The charts below show that for some of the stocks, social sentiment outperforms simple buy and hold and for others trails behind it.