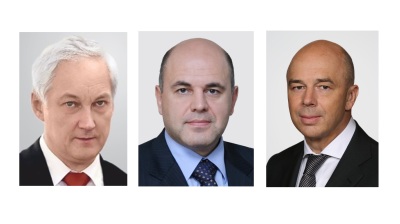 Mishustin has spent the first week distributing responsibilities to his new team of eight deputy prime ministers who will oversee the line ministries.

However, Putin hand-picked many of the ministers and Belousov has been transferred directly from the presidential administration, where he served as Putin’s personal economic advisor, to become the first deputy Prime Minister, the second in command after Mishustin and the third most powerful man in the country.

As bne IntelliNews wrote in “Who's who in the new Russian government”  most of the appointees, including Mishustin, are talented technocrats and good administrators who have been chosen to implement part of the 12 national projects programme. However, Belousov is clearly a political appointee of Putin, in the government to act as Putin’s proxy and oversee the work of the Duma.

He is also known to advocate boosting state spending to kick-start the economy, cutting interest rates and using the state-owned enterprises (SOEs) as a vehicle to control economic growth and investment. Siluanov, on the other hand, is a liberal and has proved to be very cautious. Specifically, Siluanov opposes loosening the purse strings, which he fears will simply squander resources and stoke inflation.

Normally the First Deputy Prime Minister would oversee the work of the Finance Ministry and Siluanov would have to report to Belousov. But under the agreement reached on January 29 Mishustin has removed the roles of overseeing budgetary and tax policy. In an unusual break with etiquette, Siluanov will bypass Belousov and report directly to Mishustin – the only ministry that will not be overseen by a deputy prime minister.

As Mishustin is the former head of Russia’s tax service and used to report to Siluanov, the two men know each other well and have been working together on the revamp of the tax service spearheaded by Mishustin.

The decision of curb Putin’s proxy in the government stands in stark contrast to the outgoing Russian Prime Minister Dmitry Medvedev, who was a weak leader and by this very weakness gave Putin direct control over the functioning of the Duma. The decision to curb Belousov’s powers in his first week on the job is maybe a sign that Mishustin intends to actually wield some of the considerable powers afforded him by the Russian constitution as the head of the government.

Separately BMB reports that sources from both the presidential administration and the Duma are saying that all Duma parties are preparing for early parliamentary elections in September 2020, rather than 2021. This could lead to another government reshuffle, and probably earlier presidential elections in 2022.

The complete list of Mishustin deputy prime ministers and their responsibilities was released the day before:

Deputy Prime Minister Marat Khusnullin will be responsible for housing policies, mortgage and public utilities, roads and the development of regions and cities, as well as Crimea and the Kaliningrad Region.