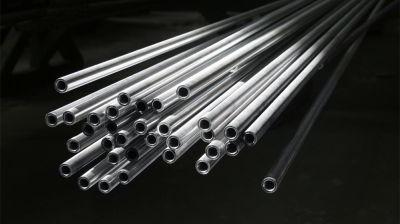 Pipemaking is a huge business in Russia and market leader ChelPipe is toying with the idea of an IPO as the business gets more competitive / wiki
By Ben Aris in Berlin March 24, 2020

With the predominance of oil and gas in Russia’s economy the pipe-making business is a big one. ChelPipe is the market leader and amongst its many jobs delivered many of the pipes that went into the controversial Nord Stream 2 pipeline from Russia to Germany. The company is growing steadily and toying with the idea of an IPO Valery Borisov told bne IntelliNews in an exclusive interview.

“We ship some 2mn tonnes of pipes a year and cater to a global market, not just Russia,” Valery Borisov, the CFO of ChelPipe, told bne IntelliNews in an exclusive interview.

ChelPipe is the fifth largest steel pipe producer in the world in terms of volume and a market leader in Russia.

There are basically three main types of pipe: seamless oil & gas, which is a high quality product that is becoming increasingly important as it is used in horizontal drilling. More on that in a moment.

Then there are large diameter pipes that are cheaper to make and used throughout the country for everything from moving oil to carrying the hot water supplies to housing.

And finally there is seamless industrial pipes – a growing segment in which ChelPipe holds a leadership position.

“Our market share in Russia was 49% in 2019 in seamless industrial pipes and for seamless oil & gas pipes we were number two in Russia after TMK with a 18% market share. In large diameter pipes we are number one and shipped more than 900,000 tonnes in 2019. We have a very strong position on the market.” Borisov says.

The company is majority owned by two Russian businessmen Andrey Komarov and Pavel Fedorov who together control 97.3% of the shares.

There is also a small “technical” float listed on the Moscow Exchange of 2.7% that is legacy of the company’s privatisation in the 90s.

“We started paying dividends in 2017 to the shareholders at 25-30% of net profits, but most of this money comes back to the balance sheet,” says Borisov.

And the company is in robust financial health. The company has an international credit rating of BB- from Fitch and Ba3 from Moody’s, both with stable outlook. The company earned about $3bn in revenue in 2019 with an EBITDA of $500mn and has an EBITDA margin of 16.6%. The net debt to adjusted EBITDA ratio is a modest x2.1.

The company has three main divisions: steel pipe production, trunk pipeline systems, and oilfield services, but the pipe-making accounts for 90% of the company’s revenues.

Given the importance of oil of gas to the Russian economy, the market is large and lucrative. But ChelPipe’s business is not just limited to Russia. The company has more than 2,000 customers in Russia and abroad with whom it works supplying pipes and related services, according to Borisov. While it caters to the oil and gas giants like Russia’s state-owned Gazprom and Rosneft, the top 10 clients for pipes together still only account for less than 9% of the company’s revenue.

“It's a good diversified portfolio of clients,” says Borisov, “and more than 25% of our pipe-making business goes to export,” says Borisov.

The business for seamless pipes is a bit different to making regular pipes. Here the big Russian oil and gas companies play a more important role. Gazprom and its oil subsidiary Gazprom Neft, together with Russia’s biggest oil company Rosneft, account for about a fifth of ChelPipe’s seamless pipe revenue between them.

For most applications it is enough to take a plate of metal, bend it into a circle and weld the edges together to make a pipe. However, in the case of something like horizontal drilling a welded pipe is not reliable enough.

As most of Russia’s oil and gas fields in western Siberia are reaching maturity companies are increasingly drilling sidewise into the nooks and crannies of the field to get at the last oil and gas pockets. The extra stress that horizontal drilling puts on a pipeline means companies have to use the more difficult to make seamless pipes instead of welded ones.

ChelPipe has set up a complete vertically integrated production goes from producing steel billet through to the complicated task of casting seamless pipes.

“There are only two companies that produce seamless pipes in Russia – ChelPipe and TMK – although we are expecting at least one more company to enter the business in the next few years,” says Borisov.

“LDP is largely a project driven business, but when the big companies are spending their capex on new projects the attention turns back to maintaining the existing network so there is a steady demand for large diameter pipes,” says Borisov.

ChelPipe is number one on the export market for LDP, according to Borisov and produced a total of 900,000 tonnes of which 500,000 tonnes was exported in 2019.

Borisov points out that there are a lot of pipeline projects going on in the world in which ChelPipe is an active player. Last year Russia completed the Power of Siberia as pipeline to China and the Turkish Stream pipeline and Nord Stream 2 Russian export pipelines are both near to completion.

However, there are slew of other smaller projects in the region such as the TAPI in which ChelPipe is involved, a fourth line of Central Asia-China gas pipeline. In Europe too there are number of plans like the Poseidon pipeline among other things. In all LDP make up about 15% of ChelPipe’s EBITDA and more than half of its production is exported.

“There are a lot of plans on the table in the region as well as new plans in Russia. A second pipeline running in parallel to the Power of Siberia is already being discussed, for example. And even if these plans are delayed a company like Gazprom will then switch its attention to maintenance. Significant part of the system needs to be upgraded as most of the gas pipelines were built long time ago and working lifespan is set to expire,” says Borisov.

Now the company is thinking about going public, not just because the major shareholders want to take some cash off the table, but also Borisov says the market is becoming more competitive and being public will help keep the company competitive.

“An IPO is one of the options we are considering. We have already issued debt and now we think we are ready for equity. But it is not just to raise capital but also about how you manage a company,” says Borisov.

ChelPipe board of directors recently put in place a new strategy for 2020 to 2024 where it set ambitious targets and hopes to boost profits and revenue in the period.

“The biggest changes will be to how we manage the company. We want to shift to a client-centric philosophy and focus on developing high-potential segments with moderate levels of competition and on increasing the share of niche products with high added value,” says Borisov.

ChelPipe has already appointed several independent directors who head up some of the key committees, but Valery Borisov argues having some independent shareholders representation on the board following an IPO would improve the quality of management further.

To accommodate the float the two main shareholders are willing to reduce their stakes to 51%, as they would like to retain control of the company at the end of the day.

Kremlin VTB bank to be hit by investor class action for seizing foreign shares
11 hours ago
Russian metal giants Rusal and Norilsk Nickel could merge under sanctions
11 hours ago
US and Chinese slowdown will tip the world into recession, says IIF
4 days ago
NEO: Rising in the East, Setting in the West: Russia strengthens trade with Global East
5 days ago
Stagflation fears continue to rise
5 days ago