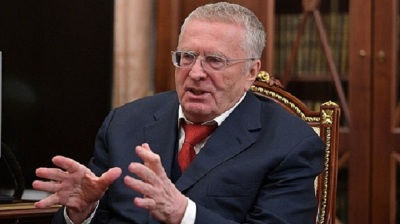 Vladimir Zhirinovsky was notorious for his provocative politics and his incendiary character. / Image: bne IntelliNews
By bne IntelIiNews April 7, 2022

As founder and leader of the misleadingly named Liberal Democratic Party of Russia, Zhirinovsky espoused far-right populist and authoritarian views. He stood for the presidency on no fewer than six occasions, and was a household name in Russia.

Zhirinovsky was part of Russia’s “systemic opposition,” a cadre of politicians from outside the leading party who are allowed to run in elections. Nonetheless, he and his views were far from tame.

Born in Kazakhstan, Zhirinovsky was notorious for his incendiary character. He threw juice in the face of liberal politician Boris Nemtsov during a televised debate, started numerous brawls in Parliament. He once spat at a rival before telling the leader of the Democratic Party that he’d “smash in his head” in a TV debate for presidential candidates.

His party was famously mercenary, espousing right wing popularist views, but loyally voting the Kremlin’s line in any major debate. At the same time the LDPR was rumoured to have a rate card for proposing legislation and voting on less important issues.

Nor were Zhirinovsky’s political opinions any less sanguine. He predicted the invasion of Ukraine almost to the exact day, and wholeheartedly endorsed it, telling MPs that “on February 22, you will feel [our new policy]. I would like 2022 to be a peaceful year… It will not be peaceful. It will be a year when Russia becomes great again.”

The Kremlin used Zhirinovsky as a way of blowing off steam and his extreme views served to normalise the pseudo democracy of the rest of the system, by making the cynical politics of Russia’s anocratic, pseudo authoritarian system look more reasonable in contrast.

In 2014, Zhirinovsky called the Baltic states and Poland “little dwarf states” and hinted that Russia would carpet bomb them due to their membership of Nato: “They'll be wiped out… we have to do carpet bombing so that not a single launch pad remains or even one plane. So – no Baltics, no Poland,” he said.

He also held xenophobic and racist views, despite being half Jewish himself. When asked if he was Jewish on account of his patronymic (Volfovich), Zhirinovsky said: “My mother was Russian and my father was a lawyer." He later disavowed the statement after researching his father’s life following his emigration to Israel, concluding that he was not after all a lawyer, but rather an “agronomist”.

Zhirinovsky claimed to have been vaccinated against COVID-19 eight times. He contracted coronavirus and was hospitalised with pneumonia in February. He died a month later.