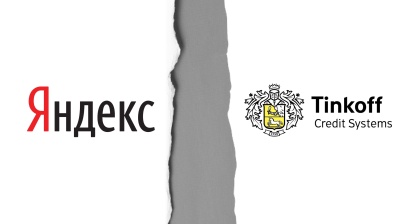 Russian internet giant Yandex has pulled the plug on a deal worth $5.5bn to buy Russia's only purely online bank, Tinkoff Bank.
By bne IntelliNews October 16, 2020

Russian internet major Yandex has called off the $5.5bn deal to acquire Russia’s only pure  online bank and an investors darling, Tinkoff bank, Yandex said in a press release issued on October 16.

Yandex didn't explained the reason for the decision and only said the negotiations on acquiring and merging with banking TCS Group, that owns Tinkoff Bank, have been terminated, bringing an abrupt end to one of the biggest deals in Russia for years.

As reported by bne IntelliNews, in September Yandex in a bombshell announcement said it intends to acquire TCS for $5.5bn, which made both companies gain over $2bn in value as their stocks rallied on the news.

The decision follows reports carried by The Bell that the owner of TCS Group, famous serial entrepreneur Oleg Tinkov, was still in talks with other large Russian groups and rich investors on a potential sale. In particular a tie with Mobile TeleSystems (MTS) mobile major and operator of MTS Bank was mentioned as a possible buyer, The Bell reported on October 14 citing unnamed sources.

That deal appealed less to analysts as MTS Bank is a direct competitor with Tinkoff Bank, although MTS bank has been having a hard time during the crisis.

The Bell reported that Tinkov has been talking to dozens of potential investors over the last year and half.

Tinkov was diagnosed with leukaemia it was announced in March and has been stepping back from the day to day operations of many of his companies.

BCS Global Markets commented on October 16 that some investors were optimistic on the deal, and warned that Yandex shares could come under short-term pressure.

Still, the analysts at BCS GM note that "the synergies from the deal were not a given, as well as the deal itself," so the development is seen neutral for Yandex and TCS (Hold recommendation for both names).

As far as TCS is concerned, while BCS GM was "inspired by possible deal", the analysts acknowledge strong TCS standalone potential of building up the business further. The banking group is expected to deliver strong 3Q20 results, while unconfirmed reports suggested that TCS is looking for another buyer apart from Yandex.

Analysts at VTB Capital (VTBC) took the same line, saying it was a shame the deal would not go ahead but that both companies are strong and both have considerable potential to continue growing their own businesses separately.

“While we believed that this potential deal might have implied some optionality value for Yandex, we never built any valuation impact into our model, given the uncertainties and risks. Therefore, we take the announcement  as neutral,: Vladimir Bespalov, an equities analyst with VTBC said in a note emailed to clients.  “We remain positive on Yandex, with our 12­month Target Price of $75 implying an ETR of 23%. We also tend to view any

potential decline in Yandex's stock on the back of the potential deal being terminated as an opportunity.”

Yandex will continue to look for fintech opportunities as Russia’s new economy has reached a critical mass and the leading companies are currently in the process of expanding and building up entire ecosystems through a string of acquisitions and investments. Yandex is battling it out with the other industry leaders Sberbank (now known simply as “Sber”) and Ozon, e-commerce player and online market place that plans to IPO in New York later this year.

“In our view, Yandex will continue to look into the development of Fintech, with potential options including other M&A deals, hiring Fintech professionals to develop expertise internally, and entering into partnerships with existing market players. Yandex might also seek to deploy the capital, which was initially earmarked for the deal with TCS Group in order to grow its business more aggressively in the areas of its core expertise. Overall, we still see Yandex's long­term prospects as attractive, which supports our positive view on the stock,” Bespalov said.

Notably, as covered by bne IntelliNews, Yandex is venturing into the financial services terrain, stepping up the competition with the Sber ecosystem of its former ally state-controlled bank Sberbank. Thus, on Yandex side another large potential acquisition in the fintech sector is also possible in the nearest future.