Situated on the most exclusive section of Davies Street in the heart of London's Mayfair is Evgeny Chichvarkin's new wine store, Hedonism Wines. Once you've managed to find a rather disguised entrance and entered the shop, words like "twinkling" and "lustrous" immediately spring to mind - not to mention "exorbitant".

With guitar rock music streaming unobtrusively in the background, and staff hovering almost invisibly around the shop, you are left on your own to admire double magnum champagne bottles (6 litres to you and me) and snake-shaped crystal decanters with a starting price of Â£2,000.

The floor-to-ceiling library shelves are artfully stacked with the world's best rums, gins, liqueurs, vodkas, whiskies, grappas, ports, cognacs and brandies - anything and everything the world of high-class hedonism has to offer. "Not just anything - only the best," notes Chichvarkin, a Russian millionaire and the founder of Hedonism Wines.

And the "best" according to Chichvarkin, is in the luxury goods market. "The market is growing as the consumption of luxury goods is back to where it was before the crisis. It's the fastest growing market. Luxury is walking tall around the planet, but London is still the world capital of luxury retail," says Chichvarkin. And his Mayfair wine store is a good example.

Lavishly furnished with crystal, oak and intricate cast iron interiors, and with 5,500 lines of fine wines, priced between Â£15 and Â£125,000 per bottle, Hedonism Wines is set to prove his point. According to some experts, by the end of 2015 the world's total luxury goods market will reach $500bn, and is currently estimated at $400bn.

A Muscovite trendsetter and a trader since he was a teenager, Chichvarkin is embracing his new lifestyle as an unconventional wine merchant and a keen polo-player. "I'm done serving the middle classes. I like my new extremely rich, capricious and unreasonably demanding clientele," says Chichvarkin. He insists he is not old enough yet to join the "Establishment", but considers the UK and London to be the financial centre of the world. And he's not alone.

Attracted by the UK's investor-friendly tax and predictable political systems, fair courts and multicultural tolerance, Russian wealth is rapidly shifting towards the British Isles. And it's not just the privilege of the super-rich. After Vladimir Putin's re-election as president, the core of Russian emigration has begun to change, with well-educated and intellectual middle class professionals finding refuge for their financial and intellectual wealth in the UK. In 2011 there were over 100,000 Russian-speaking children educated in London schools.

Chichvarkin talks with a coolness about Russia's future, yet there is a glimpse of boyish glee in his eyes when he talks about his pet project - a unique model village in Russia, purpose built for tourism, but also aimed at restoring ethnic Russian craftsmanship and centuries-old skills. "We wanted to attract local craftsmen and artists to run workshops and teach people how to carve wood, make cheese and even brew their own beer!"

An unusual hybrid of modern capitalist and utopian romantic, Chichvarkin speaks at length about his vision of new Russia. Yet his dream of restoring the best in Russia has had to take a backseat.

Like many before him, Chichvarkin was driven out of Russia after a long and increasingly dangerous brush with Putin's regime. The former telecommunications tycoon and co-owner of one of Russia's leading mobile phone companies, Yevroset, Chichvarkin was accused of kidnapping and extortion. The charges against him were dropped in 2010, but after selling his 100% interest in Yevroset to Alexander Mamut in 2008 (purportedly for $400m), Chichvarkin fled to the UK. "There is no point in investing in Russia while Putin is running the country," he says, convinced that without Putin, Russia would be the third most developed country in the world after the US and Japan. "If there was no Putin, of course I would never have moved out of Russia. After selling Yevroset, I told everyone that I wasn't going to move my money abroad... Until Putin is carried out of Russia, I am not going to invest there."

An intellectual, and expensively eccentric, Chichvarkin has an aura of the gregarious Russian merchant with exclusive tastes and astute business instincts. Having looked around for business ideas for over six months, Chichvarkin spotted a niche in the luxury goods market in London. "When I first came to London and was looking to buy some expensive wine, I struggled to find much on offer. Everything had to be ordered and I had to wait for days for the delivery." Hedonism Wines offers free delivery within an hour across central London or same-day delivery to a private jet.

According to the company's CEO, Tatiana Fokina, some of the bottles in the shop were bought at various charity auctions, while the proceedings from their most expensive bottles have been given to the Water Aid charity.

Chichvarkin's decision to invest in fine wine was not only based on his personal tastes in luxury products, but also on the longevity of the product. "The good thing about investing in wine is that it won't go off or out of fashion, and the longer you keep it, the more expensively you can sell it."

And as the wine industry saw such chain stores as Oddbins and Wine Rack going out of business by 2011, while Harrods' fine wine department has almost trebled in size, the time to open Hedonism Wines seemed right. "Having analyzed all of this, I decided to invest in fine wine in the UK. In my shop we have the best collection of wines and spirits in the world available for sale. This business is my life and I hope the second half of my life will be spent in this shop or around it," Chichvarkin says. 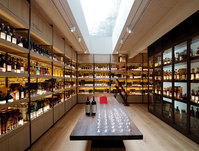