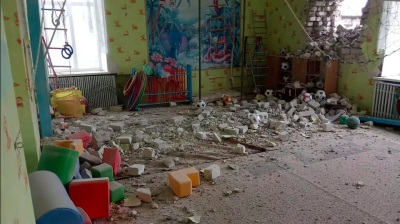 President Volodymyr Zelenskiy condemned the attack as a “provocation” from Russia whilst the international community expressed concern.

“The indiscriminate shelling of civilian areas constitutes a clear violation of the ceasefire and the Minsk agreements. We call for the immediate prevention of further escalation,” said the OSCE Chairman-in-Office and Foreign Minister of Poland, Zbigniew Rau.

However, a Telegram account allegedly run by the Luhansk People’s Republic, a Russian-backed separatist group, posted their own analysis of the attack, claiming that the Ukrainian Armed Forces were behind the shelling of the kindergarten.

“The location of the childcare centre building and the angle of the wall to which the shell was thrown, allowed us to calculate the precise trajectory of the shell's flight. The diagram shows that the shell could only have been fired from the eastern direction. The position of the alleged gun from which the shell was fired is in the territory controlled by the 79th AFU brigade. Any sensible person would determine that the units of the People's Militia could not be in that direction by definition. All this proves that the farce with the destruction of the kindergarten is a provocation by Kyiv to destabilise the situation in Donbas,” the statement read. 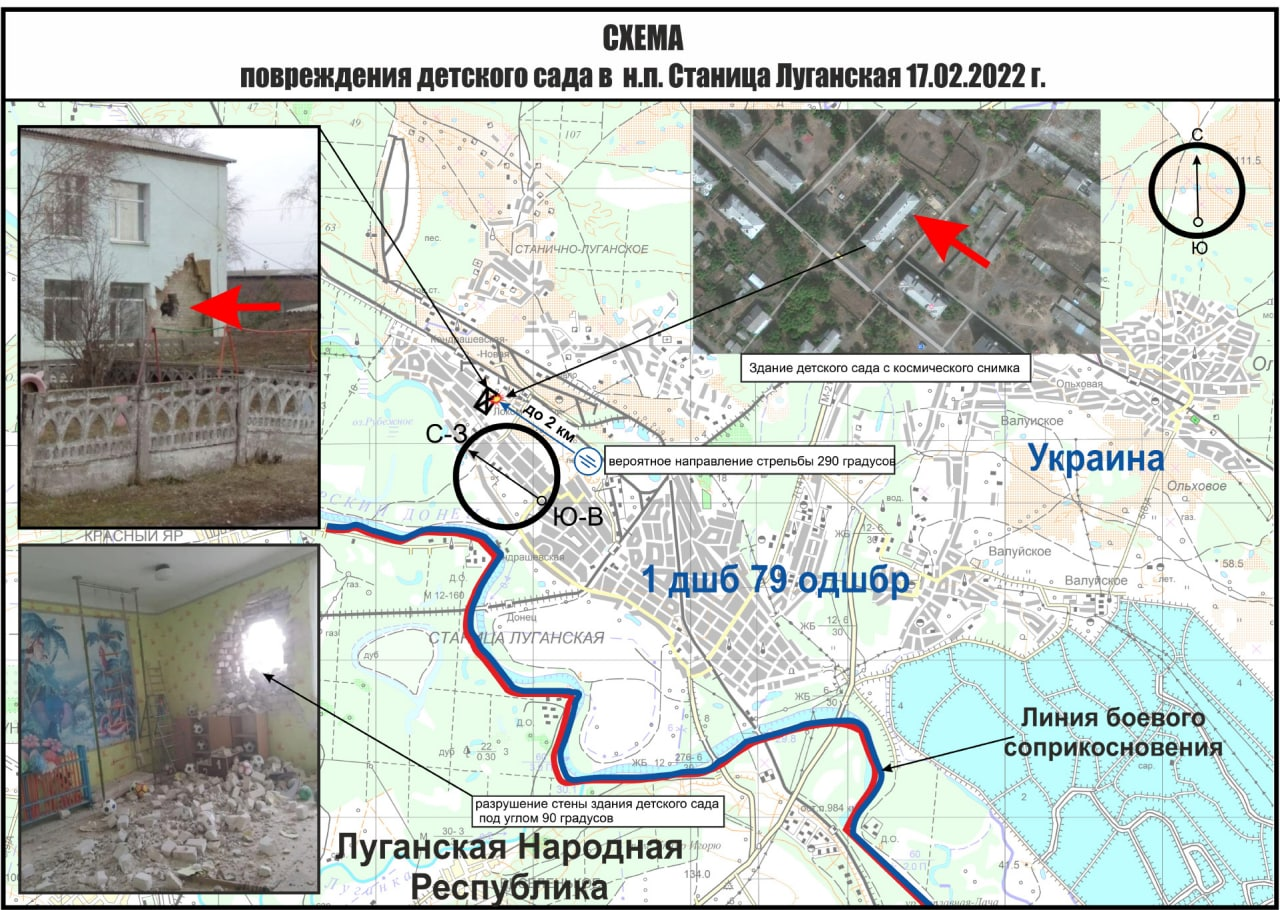 The LPR claims the Ukrainian army falsely accused the rebels in order to “distract public attention from the regular violations of the Minsk agreements by the AFU and the destruction of civilian facilities in the Luhansk Republic.”

But, Bellingcat researcher Aric Toler pointed out the major flaw in the LPR’s narrative. Their analysis focuses solely on the wall of the school and ignores “the gigantic crater on the ground showing that the shell clearly came from the south,” indicating the attack came from the rebels. 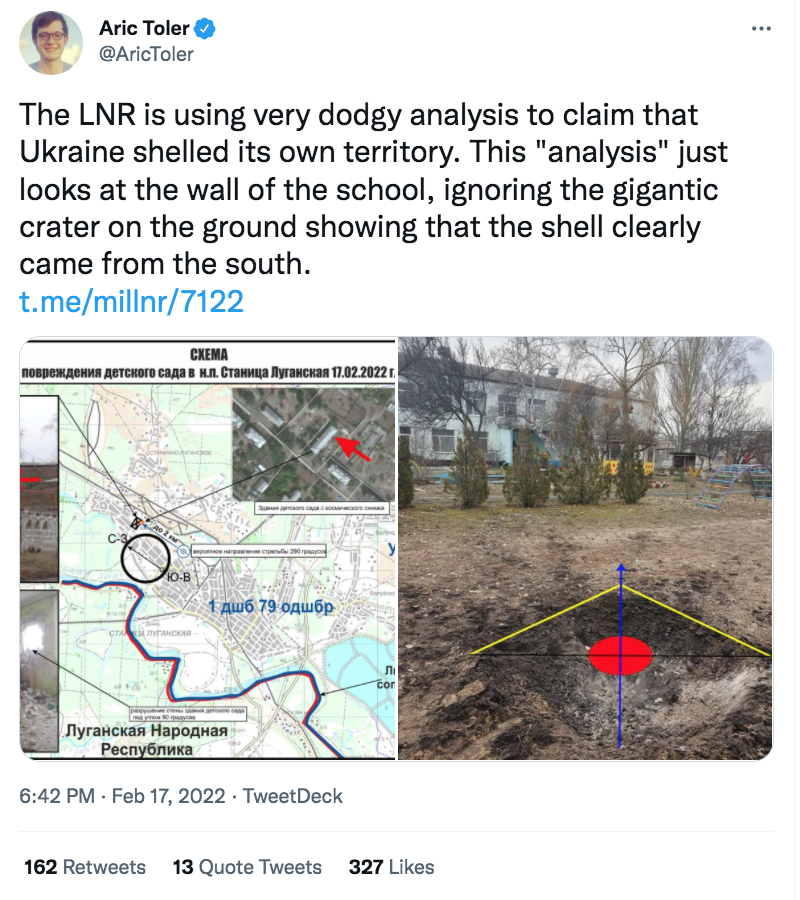 Fact-checkers from InformNapalm also noted that the direction of the shelling indicates it likely came from the LPR. 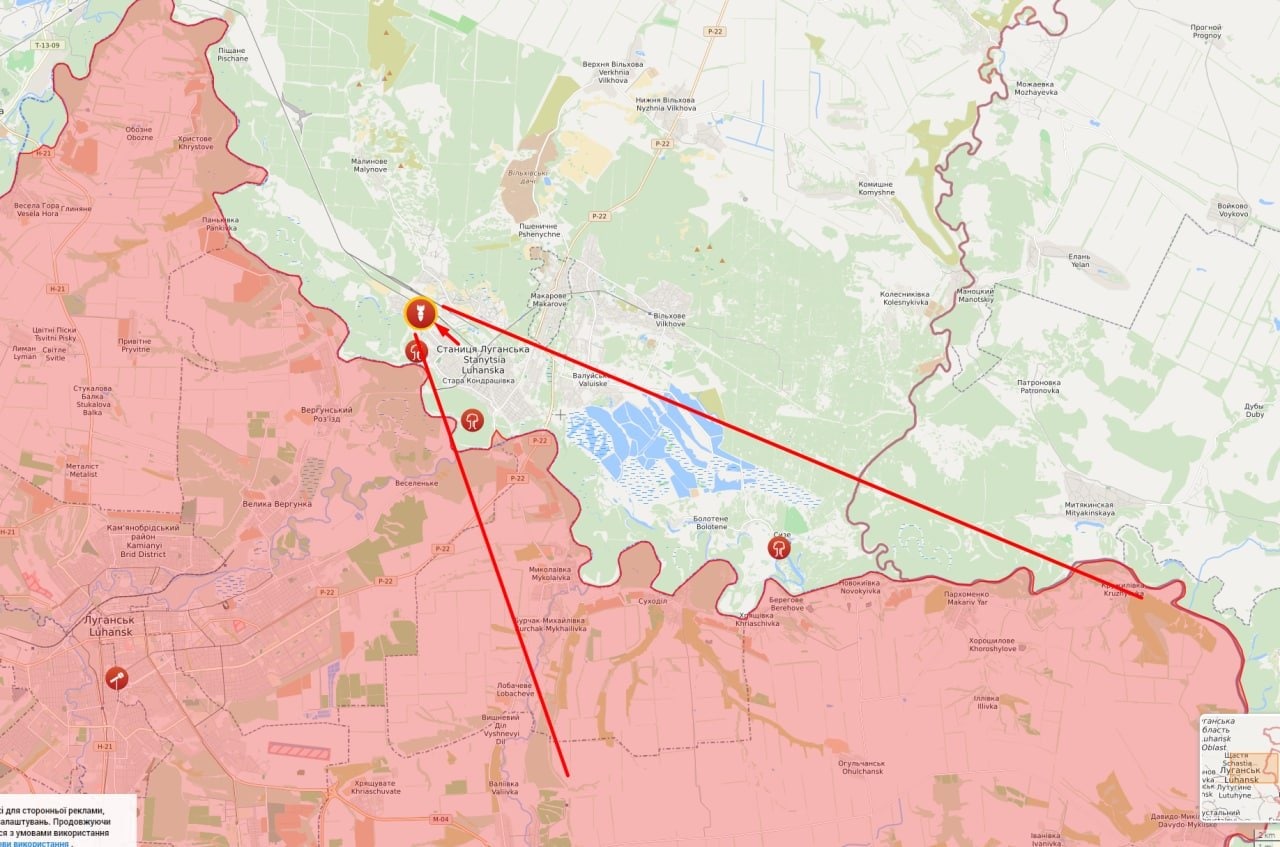 The LPR's narrative follows on from recent Kremlin claims that Ukraine is committing atrocities towards ethnic Russians in the Donbas region. Western diplomats denounce these accusations as false, whilst the OSCE hasn't recorded any "atrocities" committed by the Ukrainian side. 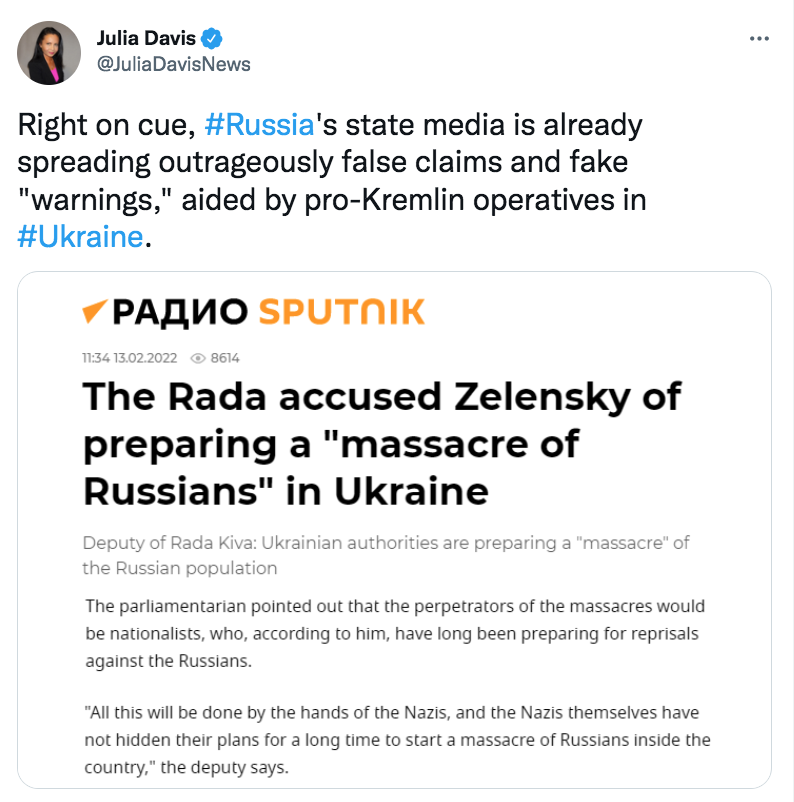 Moreover, it was confirmed that the kindergarten was in Stanytsia Luhanska, a village in Ukrainian-controlled territory, not rebel-held territory, counteracting the claim that Ukrainian forces were targetting "civilian facilities in the Luhansk Republic".

But this has not stopped Russian media from spreading disinformation that the Ukrainian Armed Forces orchestrated the shelling. Several news sites, including Tsargrad, published the “analysis” from the LPR, backing its accusation.

Other social media users deny the legitimacy of the shelling, stating that the event was staged. They particularly focus on a hole in the side of the kindergarten that appears to lack shell fragments or bombing remnants. Others point at the fact that the window next to the hole remained intact as evidence the attack was faked.

Bellingcat founder Eliot Higgins drew attention to an image allegedly showing a machine with a drill attached, which was spread by numerous pro-Russia Twitter accounts as proof the hole was artificially created. 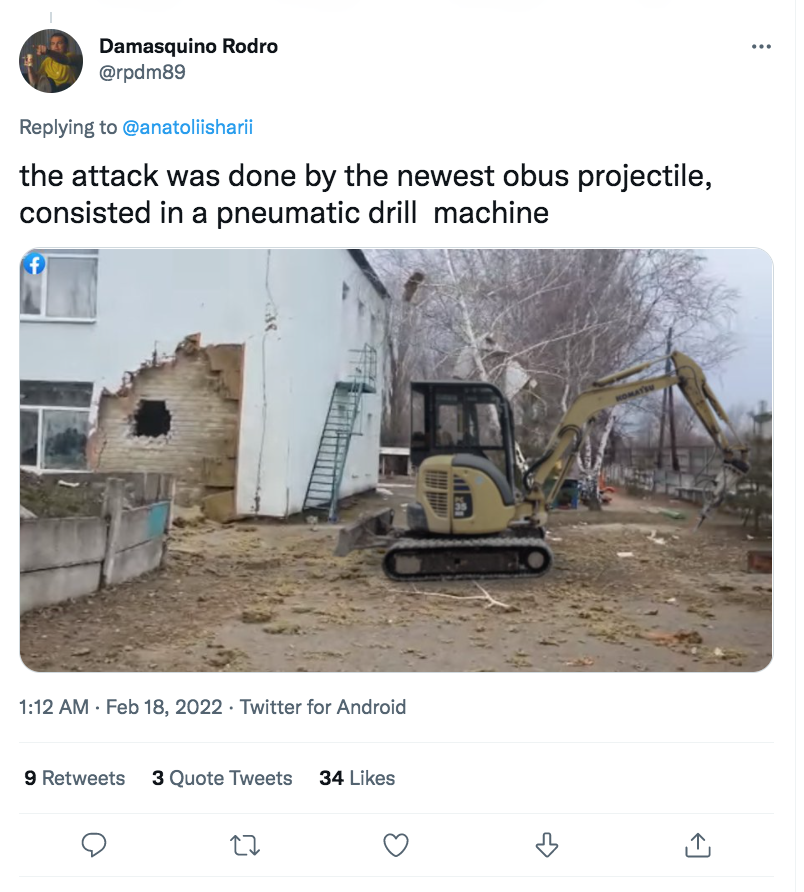 However, the original author of the tweet soon admitted to editing the image, although it continued to spread across Twitter. 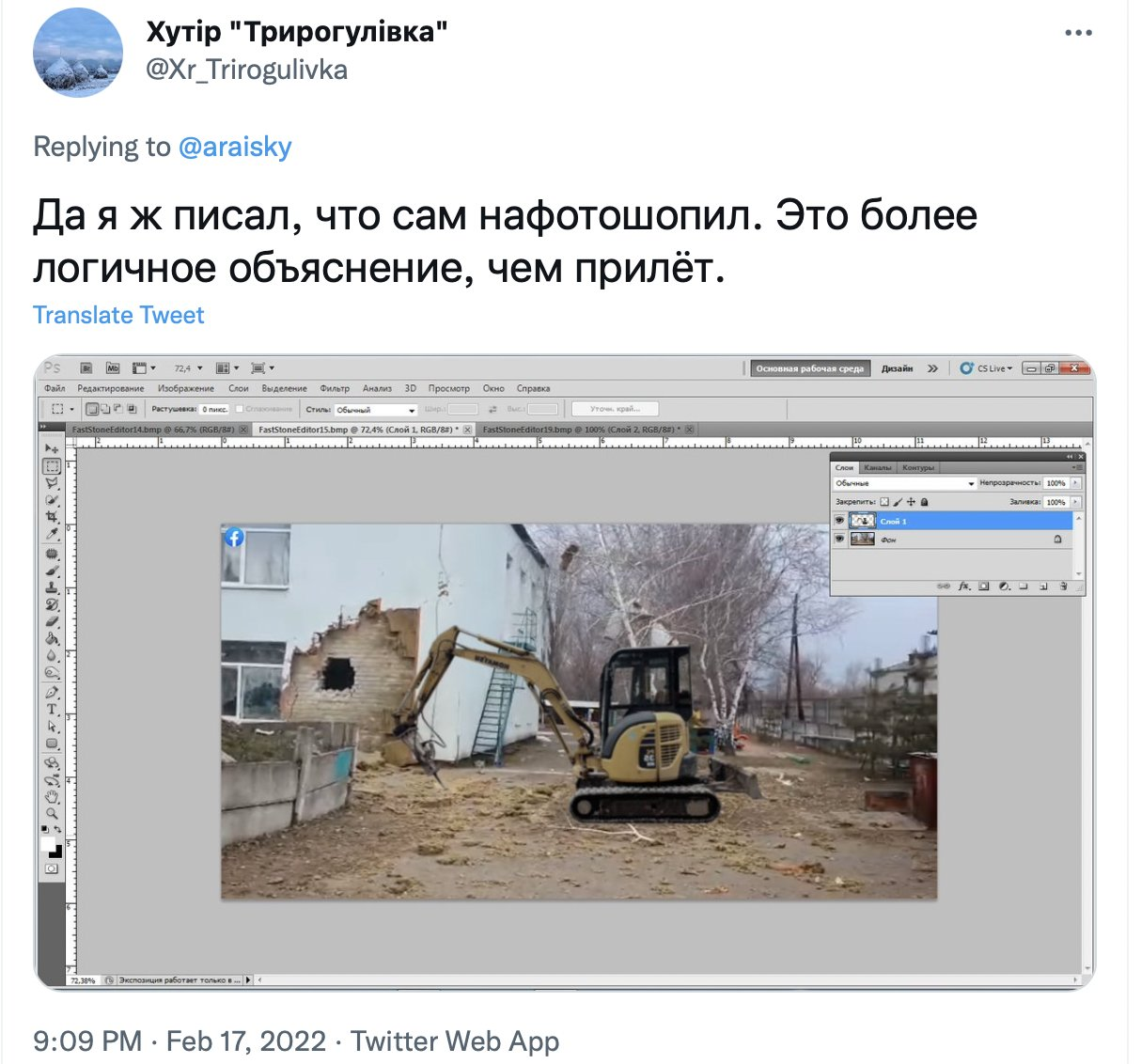 On social media, different groups are using the shelling to back their own narrative. Accounts claiming that Russia will invade Ukraine are using the attack as proof that the situation is worsening, despite Kremlin claims that Russian troops are being withdrawn from near Ukraine’s border. 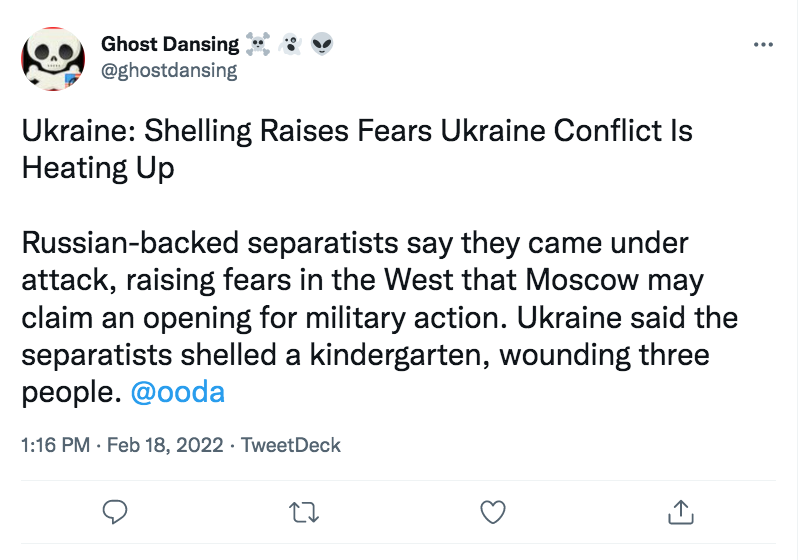 Furthermore, some see the shelling as an example of a false flag operation, a view echoed by British Prime Minister Boris Johnson who called the attack “a false-flag operation designed to discredit the Ukrainians” during a visit to RAF Waddington on February 17. 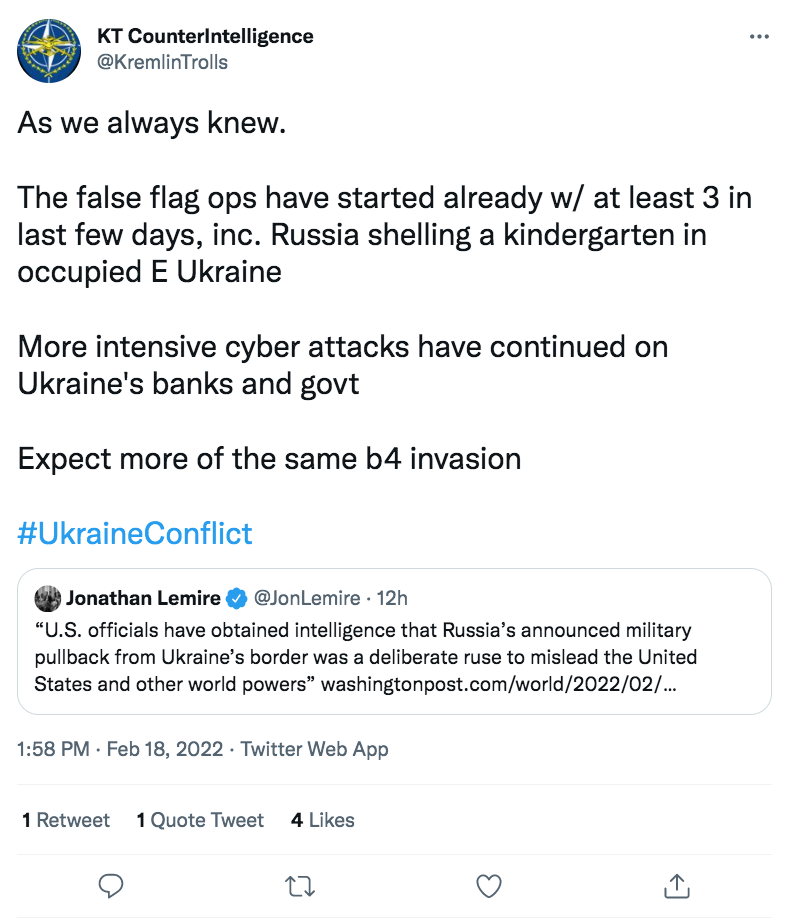 The attack puts pressure on Ukraine and the West to make a decision about Ukraine’s future soon. Russian President Vladimir Putin has made it clear he wants the implementation of the Minsk II Agreements as soon as possible, which will grant the rebel-held territories autonomy, essentially blocking Ukraine’s chance of Nato membership.