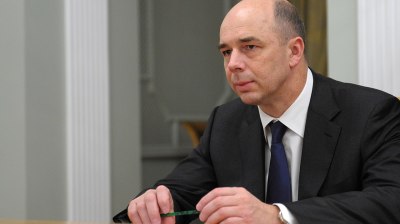 Russia’s investment stands at 20.6% of GDP but it needs to be at least 25% if the economy is to grow, says Finance Minister Siluanov. / Prime Minister of the Russian Federation.
By Ben Aris in Berlin October 15, 2019

Underinvestment is holding back Russia’s growth, but the problem’s not a lack of cash, it’s Russian business people not trusting the government, according to First Deputy Prime Minister and Finance Minister Anton Siluanov. He outlined his theory in a speech on October 12.

Investment rose by 1% y/y in 2Q19, after a 2.6% y/y contraction in 1Q19, but the overall investment level remains woefully inadequate to spur growth in the country.

Most of the investment being made is coming from the government. The second quarter increase reflected higher government military and R&D spending.

Siluanov said there was roughly RUB30 trillion ($466bn) currently sitting in businesses’ bank accounts – more than the entire state-backed investment programme for the next six years. Instead of reinvesting profits into growth, Russian companies have elected instead to pay out record high dividends, which are twice the level of the MSCI EM benchmark dividend yield rate and currently stand at around 6% a year.

“Business doesn’t trust the state, and therefore does not want to put this money into the economy,” said Siluanov, adding that in order to achieve economic growth of 3%, Russia needs to attract investment worth at least 25% of GDP. Currently, Russia’s investment stands at 20.6% of GDP, reports BMB.

Not sitting on its hands

However, the government is not sitting on its hands. October has seen it debate a new investment protection bill, designed to give domestic investors some reassurances. There are two competing versions of the bill, put forward by the Ministry of Finance and Deputy Prime Minister Dmitry Kozak, respectively.

On October 12 Russian Prime Minister Dmitry Medvedev chose the Ministry of Finance version, but told officials to incorporate many of the ideas from the Kozak version, which was widely considered to be radically liberal and offer some of the strongest investor protection in the emerging world.

Russia’s budget policy is stable; now the government must do “everything so that business feels comfortable,” Siluanov concluded.

The debate over investment protection was made to look somewhat foolish as the same day Medvedev was choosing bill versions, the Duma began a debate on Anton Gorelkin’s Duma bill to limit foreign ownership in large IT companies.

The shares of Yandex, Russia’s biggest IT company and the most valuable IT company in Europe, tanked 20% on the news. If the bill goes through then foreigners will be limited to owning one-fifth of the company. Yandex is formally domiciled in the Netherlands and 85% of its stock is traded on foreign exchanges. It  is precisely these sort of political risks that prevent Russian entrepreneurs from investing more in their own companies.