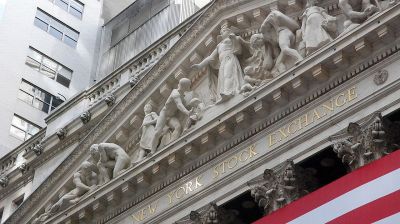 Facade of the New York Stock Exchange at 11 Wall Street, Lower Manhattan. / Photo by Josh Hallett/CC
By Jason Corcoran May 31, 2016

BCS Financial Group, a Russian brokerage born in Siberia, has received final regulatory approval in the US and is ready to start slinging stocks on Wall Street.

"On Friday evening, we got Finra's approval in the US," Luis Saenz, head of equity sales and trading at BCS, told bne IntelliNews.

The green light from Finra, the Financial Industry Regulatory Authority in the US, came on Friday May 27, arriving coincidentally just two days after the publication of a bne IntelliNews profile of the firm.

"We believe that the United States will remain the single biggest investor in Russia and emerging markets for years to come," said Saenz. "Moving into the US is a natural step in our evolution as as business."

BCS is attempting to crack Wall Street at a time when most of their established rivals are retreating or cowering under the stigma of sanctions.

The firm, which is the largest trader of equities and derivatives on the Moscow Exchange, concluded a deal late last year to buy Alforma Capital Markets, a New York-based subsidiary of Russian lender Alfa Bank.

Buying Alforma gives BCS access to a fully regulated US broker dealer without having to spend years applying for the various licenses. Alfa pulled the plug on its own operation on Wall Street after trading volumes collapsed in the wake of sanctions and Russia's economic contraction since 2014. VTB Capital and Sberbank CIB, whose parent groups were both sanctioned over the Kremlin's interference in the Ukraine conflict, have both been slashing their New York operations to the bone as business evaporated.

BCS, which hasn't been sanctioned, is already pitching aggressively to US clients, who are intrigued by an independent Russian brokerage not aligned to the state or any oligarch grouping, according to Saenz.

"We have been visiting investors in Boston and New York and they are very open to looking at Russia now," Saenz said in an interview at their London offices located in the city's grandiose Tower 42 skyscraper. "They like the angle that we are independent and privately-owned by one individual and there's no matrix or anyone lurking behind him. They also appreciate that our research guys have no one tapping them on the shoulder saying that this is the view you have to have on Gazprom."

Saenz said BCS will be targeting regional US brokers that typically have lacked any access to Russia, as well as the big mutual funds.

To run their US business, BCS has hired George Kogan, who joined in March from Brunswick Rail where he was a director of investor relations and capital markets. Kogan, who will be based in offices at the landmark Rockefeller Center, is a seasoned banker and previously worked in a variety of roles for Bank of America Merrill Lynch, Renaissance Capital, Troika Dialog and UFG, in both New York and Moscow.

Kogan is seeking to hire sales people and traders for the new office as well as support staff.

Saenz, who has been to Boston and New York four times already this year, has detected a warming in attitude amongst hedge funds towards Russia as the country's equity and bond markets have rallied.

"Some investors have said they will stay away until sanctions are lifted," said Saenz. "Others are already invested - albeit not as aggressively as the past – but there are investors, especially in New York, who are being very opportunistic and aggressive."

Sberbank, Russia's biggest lender and the proxy bellweather stock for the country, jumped on May 30 to 135 rubles, its highest on record.

Russian stocks have surged 10% this year as oil, the country's main export earner, has jumped from a record low in January. Herman Gref, Sberbank's boss and a former economy minister under President Vladimir Putin, said last week that the economy has passed through the worst of the slump.