Russian banks are having their most profitable year since 2015 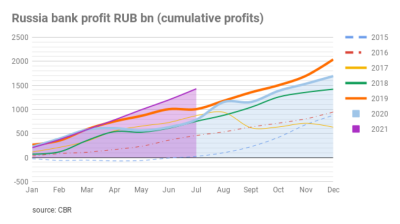 Russian banks are having their most profitable year since 2015, earning RUB229bn in Jul, up 13% on the month before. / bne IntelliNews
By bne IntelliNews August 27, 2021

The profits earned by Russian banks in July continued to rise and are now at their highest level since at least 2015, according to the latest Central Bank of Russia (CBR) bulletin.

The sector's net profit in July amounted to RUB229bn ($3.1bn) and the return on capital was a healthy 25% in annual terms. July profits were 13% higher than the result in June (RUB204bn), the CBR said.

The banking sector has earned a total of RUB1.4 trillion ($19.1bn) over the first seven months of this year, which is well ahead of the RUB787bn it earned in the same period in 2020, and also more than the RUB1 trillion it earned in 2019, the first year of strong growth following the 2014 crisis. Indeed, the sector has already earned almost twice as much in seven months as it earned for the full year in 2015, 2016 and 2017. The current earnings are also as much as the sector earned in all of 2018 as well.

Current profits are getting a boost as banks have been able to get rid of bad debt, either by collecting it, restructuring it or selling it. Once the bad debt is off their books the banks can release capital that was used to provision for bad debt that is added to the bottom line. The state-owned VTB Bank in particular has seen a big boost in profits this year thanks to being able to restructure its debt.

The number of profitable banks grew over July to 249 from 237, while the share of banks in profit in the first seven months of 2021 remains at the level of 98%. More than 85% of the profits were received by systemically important credit institutions.

In July, corporate overdue debt fell by a significant RUB265bn after the sale of bad debts of one large borrower (in fact, we are talking about restructuring with the involvement of a new owner). As a result of the transaction, there was a partial release of reserves, which influenced the growth of the sector's profits.

In retail in the portfolio, overdue debt increased moderately (RUB11bn, or 1.1%). The rate of loan restructuring has stabilised in recent months and remains moderate.

In July, banks restructured the debts of SMEs in the amount of about RUB8bn (in June – about RUB11bn), and to the population – by RUB24bn.

The number of banks working in Russia has fallen to 376 as of the end of July from 956 in 2013, when Elvira Nabiullina took over as CBR governor and began closing three banks a week as part of her clean-up of the sector.

The number of credit institutes is now approaching the 300 figure, which Russian President Vladimir Putin set as a goal shortly after starting his third term in office, which would be on a par with Germany and is considered by the Kremlin as the optimum number of banks in the country. Nabiullina’s bank sector clean and reform is not complete but it is coming into its final stages.

This article is from bne IntelliNews Russia monthly country report. Sign up to receive the report to your inbox each month, which covers the slow moving macro- and micro-economic trends, the major political news and a round up of the main sectors and corporate news. First month is free and you can unsubscribe at any time.

Severe supply chain disruption continued, however, with muted rates of improvement across the sector.

Russian composite output stagnates as services PMI contracts in November
6 hours ago
Global wage growth fails to beat inflation for the first time in 20 years
7 hours ago
Fuel sales prop up Hungary’s retail sector in October
7 hours ago
Turkey's official inflation weakens for first time in year and a half, dips to 84%
15 hours ago
Kazakh manufacturing PMI signals renewed growth in November
1 day ago