Five of Russia’s six largest banks are now on the US sanctions list, which is hurting the whole sector and could eventually precipitate another financial crisis.

Russia’s largest lender, the savings bank Sberbank, was included in a new sanctions list for the first time in September. It joins its sister state-owned banks VTB, which concentrates on corporate financing; the retail specialist VTB24; Gazprom-owned Gazprombank; Bank Moskvy, which was acquired from the City of Moscow in 2011 by the VTB Group; and Russian Agriculture Bank (Rosselkhozbank), which finances the agricultural sector.

Sanctions are being imposed an already extremely sick sector and will only add to the deterioration. Cut off from international capital markets and an economic malaise at home depressing retail deposit growth, the sector is currently being supported by the Central Bank of Russia (CBR). Lending by the CBR is approaching levels last seen during the blackest days of the 2008-09 crisis. The government has already been forced to recapitalise two state-owned banks – VTB and Russian Agriculture Bank – and is pouring more money into the sector.

A recent report from Standard & Poor's says that Russian banks have sufficient resources to weather the storm for now. "We believe that the credit quality of Russian banks will not suffer immediately from the restrictions on tapping EU and capital markets. Our analysis suggests the sector has enough liquidity to refinance its international debt falling due until the end of 2015," the rating agency says in a September 18 report entitled, "Sanctions Will Increasingly Weigh On Russian Banks' Funding And Liquidity Profiles."

However, it adds that, "the longer restrictions on capital market access last, the larger funding imbalances will become, potentially calling into question the banks' capacity to adequately finance the economy."

While the list of sanctioned banks is short, they still represent more than half of all Russia's banking assets. Luckily, following the 2008 crisis Russian banks became a lot more cautious in their borrowing and are not heavily exposed to international lenders. S&P estimate that banks total external obligations for the 2014-15 is $57bn, which they should be able to cover from their liquid reserves and maybe with some help from the CBR. 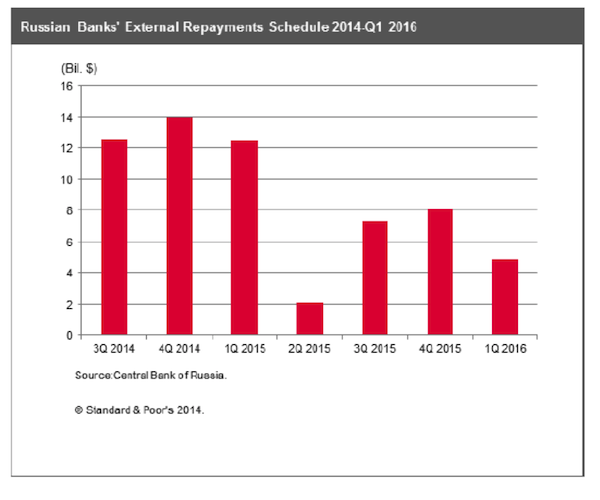 There may be no train wreck around the corner, but the CBR can't bail out the banks forever; Russia is already in a slow-moving banking crisis.

The consumer, who has been driving Russia's economic growth for several years now, has run into trouble. This year for the first time ever Russians will pay more money for loan servicing than they receive in new loans, according to the Gaidar Institute.

With the borrowing binge is over, it's now time to nurse the credit-fuelled hangover. The pin in the party balloon was a decision by the CBR to toughen prudential measures at the start of this year and deflate an obvious credit bubble that had been forming. Most of Russia's retail banks reported losses in the first half of this year and more than dozen are running dangerously close to the prudential minimums of capital adequacy set by the regulator.

The squeeze that consumers are feeling is also compounding the increasing concentration of assets in the state banks. The share of household deposits in total bank capital has been falling and was 28% as of the middle of this year, while the share of the central bank's funds in the capital of banks is rising: the share of central bank financing has nearly doubled over the past year and now accounts for 9% of banking sector total assets, still shy of the 2008 crisis year peak of 12%.

Not surprisingly, 70% of the CBR's distributions end up in the coffers of the state-owned banks, which rather than pass them onto the rest of the sector via lending on the interbank market, have instead used them to fund their own business. Corporate lending growth rose sharply to 25% on year in state banks in August, while decelerating to 5% in private banks, according to VTB Capital.

And demand for loans by corporates is only like to increase, as they are also struggling to raise money on the international capital market. Ultimately an ever-increasing circle of banks and companies are coming to rely on access to the state's reserves.

Still, no one is panicking just yet. "The liquidity positions of most banks are quite good thanks in part to financing provided by the central bank. In addition, the deposits of banks in the CBR exceed the minimum reserve requirements. Moreover, foreign assets exceed foreign debts, so the overall situation of the banking sector seems to be relatively good," economists at the central bank of Finland say in their monthly report.

And the regulator has been quietly working to increase its firepower to face a potential crisis. During the last crisis, the CBR bailed out banks using subordinated loans, including Sberbank, VTB, Gazprombank and Alfa Bank. In August, the Duma approved a law that allows the conversion of these subordinated loans into preferred shares in order to further increase bank capital if the international sanctions regime on the banking sector is tightened further.

However the fight between Russia and the West plays out, it is already clear that the heady days of massive asset growth and high margins in Russia are over. "Having focused on growing assets for most of the last decade the game has changed for Russian banks," says VTB. "They will now focus on cost optimization, increasing the share of fees and development of electronic banking going forward."