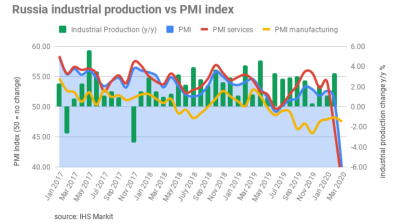 Russia Services PMI index fell to a new all time low of 37.1 in March from just over 50 a month earlier in the biggest fall in over a decade.
By Ben Aris in Berlin April 3, 2020

The IHS Markit Russia Services Purchasing Index (PMI) index crashed to a new all-time low of 37.1 in March as the double whammy of an oil price collapse and the stop-shock caused by the coronavirus (COVID-19) pandemic hit the services industry.

Manufacturing has also been affected, although the crises will take longer to slow industry, and the worst of the slowdown is not expected to take effect until next month’s result. The manufacturing purchasing index in March slowed to 47.5 from 48.2 in February. Any result below the no-change 50 mark is a contraction.

The weighted composite index of the two results was also dragged down by the sudden fall in the service sector, which had ironically been outperforming the manufacturing sector for most of the last two years and holding the composite index up. The composite index fell in March to 39.5 from 50.9 a month earlier as the Russian economy comes to a screeching halt.

“Russian service sector firms registered a substantial decline in business activity in March, a notable turnaround from the moderate expansion recorded in February,” Markit said in a press release. “The outbreak of the coronavirus disease 2019 (COVID-19) and emergency measures put in place to tackle the spread dented domestic and foreign client demand, with total sales contracting markedly. Subsequently, firms reduced workforce numbers amid greater spare capacity. Expectations also turned pessimistic, with firms uncertain of the length and severity of the economic damage from the COVID-19 outbreak.”

The more nimble service sector has been faster to respond than the manufacturing sector, but the results could deteriorate in April as the worst of the shock from the pandemic and the total lockdown of all major cites in 53 of Russia's 85 regions only came into effect in the last days of March and first days of April. Since March 30 residents in Moscow and St Petersburg have not been allowed outside other than for essential trips to the shops or pharmacy and are not allowed to travel further than 100m from their apartments.

Some services will benefit from the lockdowns, especially online business in the food and retail segments, but the vast majority of service business simply have no customers.

The shutdown has also already driven up costs due to supplier shortages and the feed through from the depreciation of the ruble, which has driven up input costs. Russia’s inflation was at a post-Soviet low of 2.3% in March but the 25% devaluation of the ruble in March is expected to drive inflation up over 4% in the next six months before prices stabilise. The Central Bank of Russia (CBR) forecasts that inflation will return to its target level of 4% next year.

Russian businesses have experienced a perfect storm of bad news. Russia reported its first case of coronavirus on March 3 but the infection rate, according to the official numbers at least, only took off in the last week of the month.

The first real blow to business came after Russia pulled out of the OPEC+ deal on March 6, which rapidly led to a collapse of oil prices and then the ruble. The markets sold off heavily on March 10 when they reopened after a long weekend to celebrate International Women’s Day and that was followed by a global rout of emerging markets as the scale of the coronavirus pandemic became increasingly obvious.

In line with the public health measures to halt the spread of COVID-19 across Russia and key export destinations, total sales dropped at the quickest pace since February 2009 as a number of customers closed their businesses. Furthermore, new export orders fell at the strongest rate since data collection for the series began in September 2014, reports Markit.

Companies have already started firing employees and cut the pay of those that remain. “Job shedding was commonly attributed to an increased need to make redundancies. The rate of decline quickened to the fastest since January 2016,” Markit reported.

“Business confidence turned negative for the first time since early-2016 and was the lowest in the series history. Some firms also noted that customer closures dragged down sentiment,” Markit said.

"At the composite level, private sector output fell at the quickest rate for over 11 years, with the first quarter ending on a negative note. Our current forecast signals broad stagnation across the Russian economy in 2020, with contractions expected in the middle quarters of the year,” Sian Jones of IHS Markit said.  "Meanwhile, inflationary pressures have accelerated, as the base effect from last January's VAT hike faded. The rate of inflation is forecast to quicken throughout 2020."