Russia's Watcom shopping index extends gains over the summer, but only because people are feeling poor 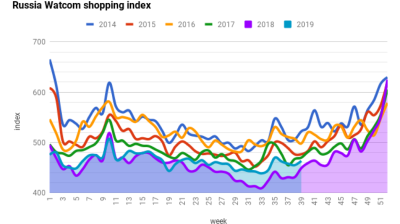 A cold summer and the perennial hunt for bargains has driven up foot traffic in Moscow's leading malls
By Ben Aris in Berlin October 22, 2019

The mild recovery in foot traffic in Moscow’s leading shopping malls extended gains that began at the start of the summer, as retail turnover results for all of Russia also picked up in the third quarter of this year.

The shopping index started this year with the worst results since it was founded in 2014 – and that year was the start of a crisis following the collapse of the oil prices and subsequent deep devaluation of the ruble. However, over the summer foot traffic volumes overtook those of 2018, a year of economic recovery, but still remain well behind the levels of traffic seen in previous years.

The volume of foot traffic in malls this year began to pick up in the 23rd week and has gathered some modest momentum since then. Part of the reason for the improvement is after six years of contracting real incomes, is malls have rationalised and several leading chains have been closing hypermarkets and less profitable stores as they refocus on profitability, as the race to grab market share is largely over.

“The low dynamics of commercial space commissioning as well as other factors boosted the rise of Shopping Index in Moscow in the third quarter overall by 5.2%. In St Petersburg it increased by 4.6%, and in Russia on the whole by 1.1%,” Watcom CEO Roman Skorokhodov said in a press release.

The explosive growth of Russia’s supermarket chains has come to an end as organised retail starts to run up against structural constraints. The leading chains have switched from expansion to grab more market share to improving profitability and have even begun to close some of their more unprofitable stores.

At the same time retailers are moving away from the large format stores and increasingly opening smaller “local” stores in built up areas that more precisely cater to the wants of shoppers. Part of this package is also the rise in the entertainment malls offer to compete with the growing volume of online retail that is eating into their business. The exceptionally cold summer weather also drove shoppers indoors.

And although the structure of organised retail is changing Russia is still adding a net amount of new mall floor space, opening more new shopping malls than any other country in Europe, real estate firm Cushman & Wakefield found, reports the Moscow Times. In the first half of 2019, around 200,000 square metres of new mall space was opened in Russia, accounting for nearly one-quarter of all new retail complexes in Europe. Moscow alone accounted for around 12% of all Europe’s new developments opened during the first six months of the year. Cushman & Wakefield says another 1.4mn square metres of mall floor space is set to open in the second half of 2019 and 2020 — placing Russia behind only Turkey in the European rankings over the next 18 months.

However, traditional shopping will increasingly be competing against the burgeoning online retail that is literally growing at ten times the speed of the traditional economy. Russian e-commerce turnover reached RUB725bn ($11bn) in the first half of this year, up 26% from the same period a year earlier. Online retail currently accounts for 4.5% of the total retail turnover, but that is expected to double in the next four years.

Shopping in traditional malls has also been lifted by a surprise improvement in real incomes in September that has fed through to better retail turnover numbers, which has also been supported by the 21% pace of growth in consumer credits this year, according to the Central Bank of Russia (CBR).

However, despite the improvement, consumer demand remains sluggish. Incomes have increased, but the overall retail turnover continues to slow at the national level.

Retail turnover was up by just 0.8% y/y in August, which was a slowdown from the 1.1% expansion the month before. All in all, retail turnover expanded by only 1.5% over the first eight months of this year. If these numbers are adjusted for seasonal factors then economists at VTB Capital believe the retail sector, which has been driving what economic growth Russia has enjoyed in the last year, is actually close to zero at the moment for the whole of Russia.

“The steady little growth in y/y terms can mostly be attributed to retail sales in the food segment, which went from growth of +0.6% y/y in August to +0.4% y/y in September,” says Alexander Isakov, chief economist at VTB Capital.

The squeeze in incomes can also ironically drive people to spend more time in the malls as they invest more time into hunting for bargains and are more willing to walk further to get the best deals from different stores.

Almost two-thirds of Russian households only have enough money to buy food, clothes and other essential items, the state statistics agency Rosstat has found. The proportion was slightly down on last year, with the share of families saying they could not afford to buy durable goods such as a new computer or household appliance at 63.5% in the second quarter of 2019, down from 64.9% during the same period last year, the Moscow Times reported citing RBC.

“Among other factors that contributed to Shopping Index growth are the change in a shopping behaviour model that turned from a “saving” one to a “careful consumption” model, non-stop promotion of retailers and shopping centres, and cold summer of 2019 in Russia,” said Skorokhodov. “People got used to the economic situation and perceive it as normal. They visit shopping centres for leisure and entertainment but can’t resist if there is an attractive discount, sometimes spending more than planned.”