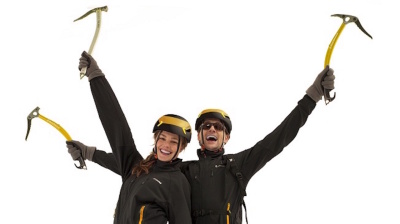 Russia's VimpelCom advertisement shows it climbing up the settlement charts for corruption. / Photo by VimpelCom
By Nick Kochan in London February 2, 2016

VimpelCom, the Russian mobile telecommunications company whose dominant shareholder is Alfa Group, is set to announce a settlement with the US Department of Justice and Swiss and Dutch authorities that will be “just shy of a billion dollars”, according to bne IntelliNews sources.

The deal follows a lengthy investigation by the US authorities into the mobile operator’s activities in Uzbekistan, where it was one of a group of foreign companies that bribed entities connected to Gulnara Karimova, the president’s now disgraced daughter, to win licences to operate in the mobile market.

A source close to the DoJ, which does not comment publicly on individual cases, said it is expected that approximately three-quarters of the funds would go to the US government and the remainder to the European governments.

The settlement by VimpelCom will clear the way for what are believed to be merger talks with Tele2, the Russian telecom operator that is part owned by the state-controlled bank VTB. Talks started at the end of last year, but were reported to have been put on hold pending a settlement with the US authorities.

The deal with the DoJ is the second largest reached under the Foreign Corrupt Practices Act, behind that reached with Siemens, but sources say it is a precursor for a much larger settlement coming down the line with TeliaSonera, the Swedish telecom operator. TeliaSonera has admitted paying bribes to Takilant, Karimova’s company, to the tune of several hundred million dollars. TeliaSonera and VimpelCom are thought to be under investigation by the DoJ for paying bribes to other government-related individuals in the Eurasian region.

Investigations by Norwegian police into Norway’s part-state-owned company Telenor were ratcheted up last year as a result of pressure from the DoJ. “The DoJ saw Telenor burying its head in the sand about their responsibility,” the source said. “The DoJ said that if the Norwegians didn’t get more active, they would take over the investigation.”

Former Vimpelcom CEO Jo Lunder was arrested by Norwegian police on November 6 and quizzed about his activities in Uzbekistan. Lunder, who had left VimpelCom and was managing the affairs of Norwegian shipping magnate John Fredriksen, was subsequently released and has not been charged. Lunder had a long career as a Telenor executive before moving onto the VimpelCom board where he worked closely with the largest shareholder, Mikhail Fridman’s Alfa.

Alfa is VimpelCom’s controlling partner, owning 49% of the voting shares, while Telenor owns 43%. The Russian and Norwegian companies have long been at loggerheads and it is thought that Telenor is seeking an exit from the partnership.  VimpelCom’s merger with Tele2 would facilitate this, say analysts.

The settlement announcement follows a US claim against VimpelCom spelled out in June, in a document presented to the US District Court, Southern District of New York. This outlined “an international conspiracy to launder corrupt payments made to Government official ‘A’, a relative of the president of Uzbekistan... This action seeks forfeiture of property located in Belgium, Ireland and Luxembourg”.

Although the document does not identify the government official “A”, it is understood to refer to Gulnara Karimova, President Islam Karimov’s elder daughter. Her rampant excesses, not only in terms of the size of bribes but also in terms of a decadent lifestyle – she was a pop star, fashion model, socialite with a dubious and increasingly salacious private life – prompted the president’s wife to persuade her husband to break off relations with the errant daughter. Gulnara was put under house arrest in 2014 (where still languishes to this day), stripped of much of her wealth and humiliated.She denies any wrongdoing.

The court document goes on to highlight the role of Uzdunrobita (the Uzbek subsidiary of Mobile TeleSystems, Russia’s largest mobile operator) and VimpelCom, saying they made “more than $500m in corrupt payments made to shell companies beneficially owned by Government official ‘A’. In exchange for inducing government official ‘A’ to affect or influence acts… to assist the telecom companies entering and operating in the Uzbek telecommunications market”.

Corrupt payments were made in three ways, according to the US document. First, shell companies owned by the government official alleged to be Karimova bought stakes in the local Uzbek subsidiaries of the international telecom company at below market prices and these stakes were sold back at a considerable profit. Second, the government official’s shell companies were paid by the international company to allow its Uzbek subsidiaries to use valuable assets, “through a non-transparent, non-competitive process”. Third, the government official’s shell company “entered into multi-million dollar consultancy contracts with Vimpelcom, purportedly to provide legitimate consultancy services but, in reality, such agreements were designed to as a way to pay large sums of money to government official ‘A’to corruptly induce him or her to use their influence with the Uzbek government to assist its operations in Uzbekistan”. The laundering involved buying investment portfolios and assets in Ireland, Luxembourg and Belgium and transferring funds through correspondent bank accounts in the US.

Payments made to entities linked to Karimova started in 2005, with the purchase of a small Uzbek telecom company called Buztel for $60mn. The US document cites that Karimova’s company Takilant held an ownership interest or an option to acquire an ownership interest in Buztel. The funds were transferred to Aqute Holdings and Investment (an Alfa subsidiary), at Amsterdam Trade Bank. Takilant subsequently benefited from the sale and repurchase of an option in Unitel, VimpelCom’s operating entity in Uzbekistan.

The document cites a $32mn payment made to Takilant by VimpelCom in December 2011 for the provision of two reports about the Uzbek telecom market.  The US document relates that, “large portions of both reports contained little or no original content... part of the English report contained similar or identical text as Wikipedia articles, blog entries”.